Coprescription of Isotretinoin and Tetracyclines for Acne is Rare: An Analysis of the National Ambulatory Medical Care Survey 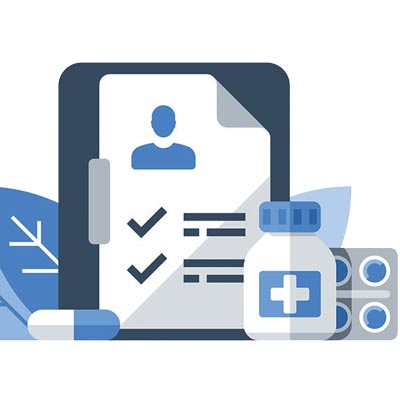 ABSTRACT: Introduction.Systemic therapy for acne can include tetracyclines or, for severe cases, isotretinoin. Concurrent use of tetracyclines and isotretinoin is known to increase the risk of development of pseudotumor cerebri (PTC).

Methods.Data from the National Ambulatory Medical Care Survey were analyzed over the years 2003 to 2013 regarding acne visits with isotretinoin and/or tetracycline prescriptions. Complex-samples logistic regression was used to estimate the effect of demographic variables on prescribing behavior.

Results. Isotretinoin and tetracyclines were coprescribed in 0.35 percent of visits for acne. Dermatologists prescribed isotretinoin more frequently than nondermatologists. Patients younger than 36 years of age and men were more likely to receive treatment with isotretinoin or a tetracycline. No differences in prescribing patterns were found based on race or survey year.

Conclusions.Concomitant exposure to tetracyclines and isotretinoin is exceedingly rare. The increased PTC risk associated with their concomitant use is well-known among dermatologists.

Approximately 85 percent of the population between the ages of 12 and 24 years of age experience at least minor acne.1 Although its prevalence decreases with age, acne can persist throughout adulthood and is known to adversely affect mental and psychosocial health, especially when significant scarring is involved.2,3Acne management can involve a combination of treatment approaches, including the use of topical and systemic therapies. Among systemic treatments for acne, tetracyclines are considered common first-line therapies.4 For many decades, the systemic retinoid isotretinoin has long maintained its role as an effective tool in combatting the disfigurement associated with moderate-to-severe cases of acne. The decision to initiate isotretinoin treatment for acne is often preceded by the treatment failure of other systemic therapies. Concurrent use of tetracyclines and isotretinoin is known to engender pseudotumor cerebri (PTC).5 This syndrome of intracranial hypertension is characterized by headaches and visual disturbances, which can lead to blindness if the causative agent is continued.

Many studies using data from the National Ambulatory Medical Care Survey (NAMCS) have explored acne therapy utilization.6–13 The NAMCS is a large, nationally representative survey of outpatient medical practices in the United States. Conducted annually since 1989 by the Centers for Disease Control and Prevention’s National Center for Health Statistics (NCHS) branch, the survey samples outpatient visits to office-based physicians (excluding federally administered practices) and collects a variety of healthcare data.14 To the best of our knowledge, the prevalence of concurrent exposure to tetracycline and isotretinoin has not been previously reported. Given the association with PTC when used concomitantly, this study sought to estimate the frequency of the coprescription of isotretinoin and tetracycline. We also aimed to examine associations in the use of isotretinoin and tetracycline for acne as it relates to age, sex, race, insurance, and provider specialty.

Each visit was considered as being “for acne” if the reason (or broad reason) for the visit included “acne or pimples” or if the diagnosis listed acne varioliformis or other acne. Of note, in this analysis, the term “drug mention” and “prescription” are synonymous and are used interchangeably to indicate active treatment with that medication, as the NAMCS medications include medications currently taken by the patient, prescribed at that visit, or dispensed in office.

In this sample of data, information on the coprescription of isotretinoin and tetracycline was presented descriptively, as the prevalence was low. Visit estimates for coprescription of these drugs cannot be provided because they would be unreliable per NCHS recommendations. We performed separate complex-samples logistic regression analyses to estimate the odds of mentioning isotretinoin and tetracycline, individually, during a visit for acne as a function of the NAMCS survey year, age at time of visit, sex, race, insurance status, and physician specialty. In these models, visits were stratified and weighted to reflect their clustered sampling probability as described by the NCHS. 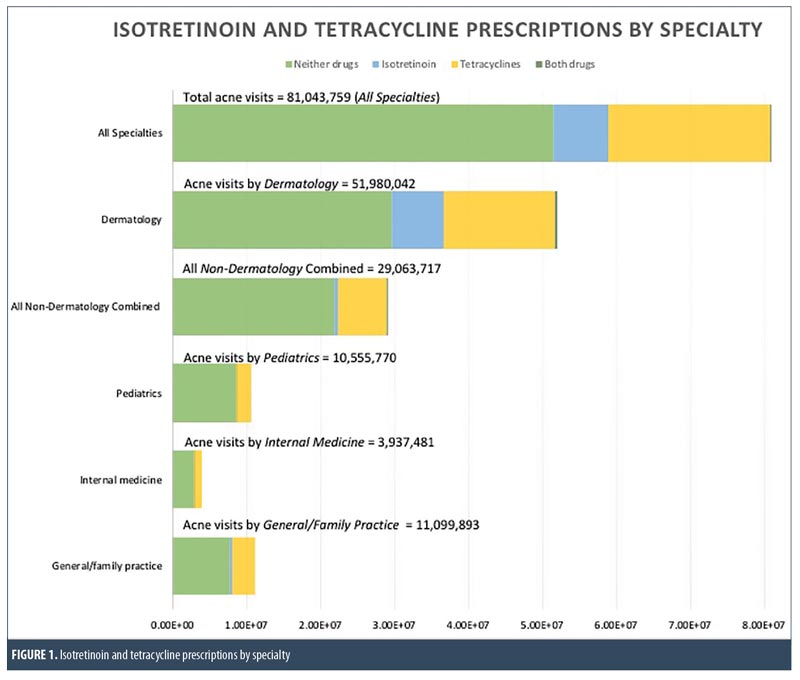 Given the high prevalence of acne, national administrative healthcare databases, such as the NAMCS, represent a suitable means of investigating how acne treatment is delivered in the United States. In the present study, we aimed to identify the frequency at which isotretinoin and tetracyclines were coprescribed to estimate how often acne patients might be exposed to an increased risk for developing secondary PTC associated with the concomitant use of these drugs. Our findings suggest that coprescriptions of isotretinoin and tetracyclines are rare. Unweighted visits that mentioned both isotretinoin and tetracyclines did not reach a total of 30 records for the survey years included in this study, so we must refrain from providing visit estimates for coprescription of these drugs, as they would be unreliable per NCHS recommendations. Nevertheless, our findings suggest that concomitant exposure to both drugs is likely very uncommon, which is reassuring, given the associated risk of PTC.5 Reportable and reliable visit estimates for isotretinoin and tetracycline coprescription might be determined if additional survey years are included in future analyses.

Dermatology visits accounted for the clear majority of acne visits. Given dermatologists’ familiarity and training experience with systemic retinoids in managing inflammatory dermatoses and moderate-to-severe acne, the increased odds (OR: 9.40) of dermatologists to mention isotretinoin compared to nondermatology physicians is expected.15,16 Our findings can only indirectly support this hypothesis, as the NAMCS structure does not directly provide information about acne severity, a known limitation of the survey methodology.

Our analysis suggests that, based on NAMCS data from 2003 to 2013, the number of isotretinoin prescriptions appear to be stable, in contrast with the decline previously reported in an earlier study that analyzed NAMCS data from 1997 to 2006.10 Of note, the sharp decline in isotretinoin prescriptions in 2006 corroborates findings presented by Kinney et al10 and, as their study suggests, this is likely a consequence of the regulatory burdens brought forth by the initiation of the iPledge program in the same year.16,17 Tetracycline antibiotics prescriptions, which were declining at the turn of the century and appeared to be on the rise thereafter, are trending towards a slight decrease based on the present study.10,12 Growing concerns regarding antibiotic resistance and existing evidence supporting the use of nonantibiotic topical and systemic treatments might contribute to this trend.18

When isotretinoin prescribing behaviors were compared between dermatologists and family practice providers for first acne visits, there was no meaningful difference between the two physician types. We posit that this is most likely due to one or a combination of the following factors: isotretinoin historically being initiated only after other first-line therapies have been ineffective for treating severe acne; concerns about the cost and potential adverse effects of isotretinoin; and providers avoiding the burdens associated with dealing with the iPledge system.16,17

The increase in odds of mentioning isotretinoin or tetracyclines during a visit for patients under 35 years of age, compared to those over 35 years of age, might be explained by acne’s usual disease course, as acne prevalence and severity generally decreases with age.2 Our finding that men are more likely than women to receive isotretinoin agrees with a similar study analyzing NAMCS data from 1990 to 1997.9 Men were also more likely to receive tetracycline. Several potential explanations for these findings include: 1) sex differences in severity, with more severe cases seen in men; 2) women seeking treatment for milder cases of acne; 3) availability and increasing use of other effective, but sex-specific systemic treatments, such as oral contraceptives and spironolactone; 4) providers attempting to avoid the increased burdens of contraception requirements with isotretinoin initiation and monitoring required in women, compared to in men; and 5) the teratogenic effects of tetracycline.9,11,19,20

Limitations. The analysis of the NAMCS data as performed in the present study offers a representative view of how dermatologic services are delivered in the United States. However, several limitations should be kept in mind in the context of our reported findings. The NAMCS data collection process has an inherent sampling bias from using a small sample to provide national estimates for a given parameter. It is a cross-sectional study that uses a visit as a sampling unit; hence, outcomes cannot be determined. As discussed, NAMCS data do not include acne type or severity, precluding us from providing more concrete explanations for differences in prescribing patterns.

Although we are unable to provide reliable visit estimates given the limitations set forth by NCHS reporting guidelines, the coprescription of isotretinoin and tetracyclines can be observed only in a miniscule fraction of all acne visits. The increased PTC risk associated with their concomitant use is well known among dermatologists; hence, patient exposure is likely very uncommon. Acne severity and level of comfort because of specialty-based training might be at play in the isotretinoin prescribing pattern differences between dermatologists and nondermatologists. The declining trend, albeit small in magnitude, in tetracycline prescription might be due to an active response to growing concerns regarding the antibiotic resistance of Propionibacterium acnes and/or changes in the utilization of topical and nonantibiotic systemic therapies.

9. Fleischer AB, Jr, Simpson JK, McMichael A, Feldman SR. Are there racial and sex differences in the use of oral isotretinoin for acne management in the United States?. J Am Acad Dermatol. 2003;49(4):662–666.