Drs. Maitriwong, Tangkijngamvong, and Asawanonda are with Division of Dermatology in the Department of Medicine, Faculty of Medicine at the Chulalongkorn University in Bangkok, Thailand.

ABSTRACT: Background.Keratosis pilaris (KP) is a common benign follicular disorder for which various topical and laser treatments have been used, with limited efficacy.

Objective.We evaluated the efficacy of intense pulsed light (IPL) therapy for the reduction of skin roughness, erythema, and hyperpigmentation in Thai subjects with KP.

Material and Methods. Twenty-four Thai patients with untreated KP on the upper outer arms were enrolled in a randomized, double-blind study. Only one arm of each subject was included and divided into upper and lower parts (25 cm2 per each part). One part was randomized to be treated with IPL using 645 to 950-nm cutoff filter and fluences of 15 to 18 J/cm2, while the other part was treated with sham irradiation. Subjects received four consecutive treatments at four-week intervals. Antera3D was used to measure skin roughness, erythema, and hyperpigmentation at baseline and four weeks after the last treatment. Moreover, clinical outcomes were also evaluated by subject Global Improvement Scores (GIS) and subject satisfaction grading scores.

Conclusion.IPL has demonstrated the ability to significantly and safely reduce skin roughness in subjects with KP compared to control after four sessions.

Keratosis pilaris (KP) is a common skin disorder, mostly seen in adolescents, with a prevalence of up to 50 percent in some populations.1 It is characterized by symmetrical, hyperkeratotic, follicular papules that contain keratinous plugs and twisted hairs.2 These papules are located predominantly on the extensor surfaces of the proximal extremities, such as the posterolateral upper arms, anterior thighs, and upper back.3 While KP is usually asymptomatic, it can have adverse psychological effects on those with the condition due to the disfiguring nature of the papules commonly located on visible areas.2,4 The pathogenesis of KP is largely unknown, yet it is considered a result of abnormal keratinization of the follicular epithelium and hair shaft defects.5

Various medical treatments, including glycolic acid, lactic acid, salicylic acid, corticosteroids, retinoids, tacrolimus, vitamin D3 analogs, and chlorine dioxide complex cleanser have been studied.4–10 Several laser therapies, including 532nm potassium-titanyl-phosphate (KTP) laser, 595nm pulsed-dye laser (PDL), long-pulsed 1,064nm neodymium-doped yttrium aluminum garnet (Nd:YAG) laser, Q-switched 1,064nm Nd:YAG laser, 810nm diode laser, and fractional carbon dioxide laser, have been reported as effective for treating KP.11–17 Intense pulsed-light (IPL) therapy, a nonlaser modality, has received less attention to date. IPL sources rely on selective photothermolysis; yet, through appropriate optical cutoff filters, they emit a defined range of wavelengths to reach the target chromophores, resulting in effects on the follicular papillae and hair bulge, erythema, and hyperpigmentation.18,19 There are many advantages of using IPL devices, including large spot size, lower purchase price, high skin-coverage rate, and versatility, making them suitable for treating large areas with multiple clinical features, as seen in patients with KP.20 At the time of this article’s publication, only one pilot study was found in the literature that evaluated the efficacy of IPL for the treatment of KP.21 A significant improvement of KP, measured with the Keratosis Pilaris Severity Index (KPSI), was reported in this study, yet some questions remain unanswered. In the present study, we investigated the efficacy of IPL, especially in terms of its effects on lesion roughness, perifollicular erythema, and hyperpigmentation.

Patient characteristics. Eligible subjects were 18 years of age or older with KP symmetrically affecting the upper outer arms and who had never received any laser treatments. Subjects with a history of hypertrophic scars or keloids, those who were pregnant or lactating, and/or those with other active skin diseases in the involved areas were excluded from the study. Informed consent was obtained from each subject before enrollment. Washout periods for all topical treatments used on the affected areas, including urea cream, lactic acid, salicylic acid, topical corticosteroids, topical retinoids, and vitamin D3 analogs, lasted for four weeks prior to the first treatment session. Systemic treatments that affect the keratinization process, such as isotretinoin or acitretin, were discontinued for at least six months prior. The study was conducted in accordance with the Declaration of Helsinki and the protocol was approved by the Institutional Review Board of the Faculty of Medicine, at Chulalongkorn University, in Bangkok, Thailand (approval number 180/61).

Treatment. One arm of each subject was included in the study. The arms were divided into upper and lower parts (25cm2 each). Computer-generated randomization determined which part of each participant’s arm would be treated with IPL (Nordlys by Ellipse; Candela Medical, Wayland, Massachusetts) using a 645- to 950-nm cutoff filter with a pulse width of 17.5ms and fluences of 15 to 18J/cm2; the other part was treated with sham irradiation using a double layer of white paper to cover the tip of the crystal light guide. The treated areas were marked by the same research assistant and photographed using the same digital camera (Nikon D7200; Nikon Corporation, Tokyo, Japan) to ensure that the same areas were treated at every visit. Test spots were selected outside the target area in each subject to determine the fluence that produced the appropriate endpoint (i.e., perifollicular edema and erythema) and also prevented undue adverse effects. Topical anesthetic cream (lidocaine and prilocaine-based cream, EMLA cream 5%; Astrazeneca, Cambridge, United Kingdom) was applied to the study areas one hour before the procedure. Cooling gel was used during the procedure on the treatment and control areas. The treatment was performed by an unblinded dermatologist. Subjects received four consecutive treatments at four-week intervals (Weeks 0, 4, 8, and 12). Subjects wore opaque protective eye goggles throughout the entire treatment period.

Objective clinical evaluation. Imaging using Antera3D (Miravex Ltd., Dublin, Ireland) and its software allowed for objective measurements of skin roughness, erythema, and hyperpigmentation, which were measured at baseline and four weeks after the final treatment (Week 16). The readouts are presented in arbitrary units. Antera3D measurements were performed by a blinded evaluator.

The present study was conducted between August 2018 and January 2019. Twenty-four Thai subjects with KP who met the inclusion criteria were enrolled (11 women and 13 men; mean age: 26.0 years; age range: 21–33 years; Fitzpatrick Skin Types: III–IV) (Table 1). One subject dropped out of the study due schedule conflicts, and 23 subjects completed the study. The baseline skin roughness, erythema, and hyperpigmentation measurements were not statistically different between the IPL and control groups (p=0.758, p=0.923, and p=0.342, respectively) (Table 2).

Subject satisfaction grading scores. Subject satisfaction scores were reported as significantly better in all IPL-treated areas (p<0.001). Among the study cohort, for these areas, 60.9 percent of patients were satisfied and 30.4 percent were very or extremely satisfied. In the sham-irradiated areas 73.9 percent of subjects reported being unsatisfied and 21.7 percent rated the results as fair (Figure 1). 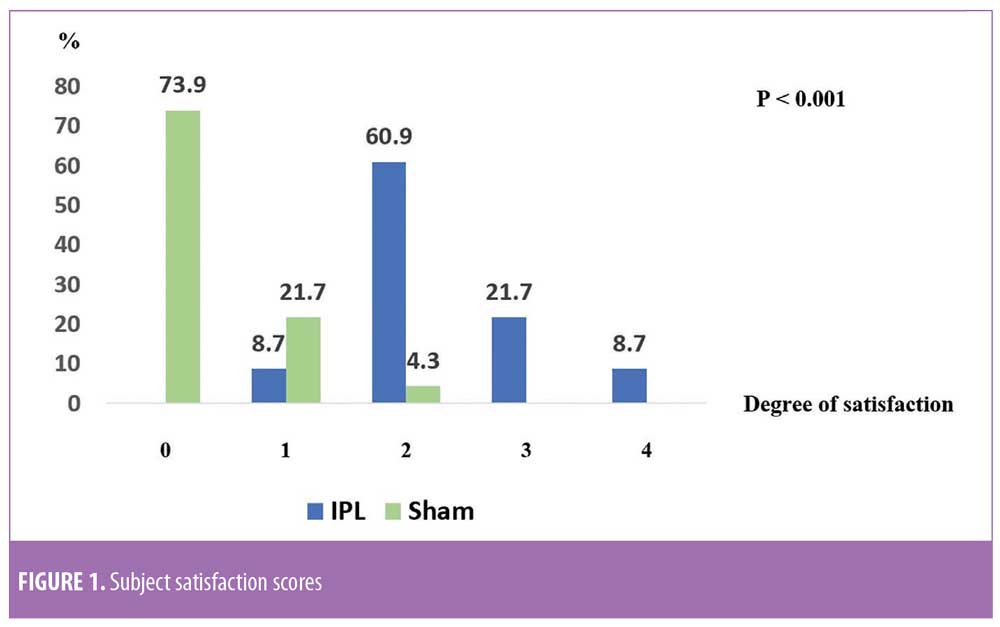 Adverse events. No adverse events, such as burning, bulla, erosion, postinflammatory hypo/hyperpigmentation or scar formation, were reported in any subjects after the treatment sessions.

KP is a common benign skin disorder characterized by keratinous plugs in follicular orifices surrounded by perifollicular erythema and hyperpigmentation.2 Apart from its clinical appearance, many individuals affected by KP have stated that roughness is their major concern.4 The characteristic roughness and gooseflesh appearance often leads to a lack of confidence and psychological distress.2,4

Despite various treatment options, very few have shown to be successful, as detailed below. Up until now, there have been no objective measures to gauge improvements in roughness, which is the key feature of this common disorder. Several studies evaluating light-based devices for different types of KP have been published. For keratosis rubra pilaris (KRP), in which redness is the major feature, 532-nm potassium titanyl phosphate (KTP) laser has produced marked improvements in skin erythema.11 In a case series by Rodríguez-Lojo et al,22 the authors reported four patients with keratosis pilaris atrophicans (KPA), a much rarer variant of KP, demonstrated an improvement in redness and roughness after 5 to 9 sessions of IPL treatment using a 570-nm cutoff filter.22 Alcantara-Gonzalez et al12 reported a reduction of erythema in 10 patients with KRP/KPA after treatment with 595-nm PDL.12 According to these reports, lesional erythema appeared to be the main reason for choosing light-based treatments.

Since hair shaft defects are considered a main aspect of the pathogenesis of KP, eliminating hair follicles in the affected areas where the presence of hair itself is not appealing seems logical. Ibrahim et al demonstrated that three sessions of 810-nm diode laser resulted in significant improvement in skin roughness but not in erythema as evaluated by disease severity score.16 In a previous study by our group,13 we successfully treated KP on the upper arms of 18 subjects after three consecutive sessions using a long-pulsed 1064-nm Nd:YAG laser; statistically significant improvements were measured in global assessment score, erythema, and the number of keratotic papules four weeks after the last treatment. In a pilot study conducted by Ryan et al,21 three sessions of IPL therapy were used to treat KP on the upper arms of 12 subjects. Despite significant reductions in KPSI compared to baseline, there was no control group and more than half (7 of 12 subjects) of the already relatively small sample size were lost to follow up.21 Our study is the first that objectively evaluated skin roughness and demonstrated statistically and clinically significant reductions in skin roughness in subjects with KP treated with IPL (Figure 2). This is in clear contrast to sham irradiation. Although the absolute percentage change might not seem impressive, the clinical improvements were reported by subjects (Figure 3), reflected greater clinical improvement scores compared to the Antera3D imaging results. IPL therapy is also beneficial for KP-associated erythema and hyperpigmentation, as reported here. It is easy to deliver and covers large treatment areas within a reasonable treatment time. In terms of safety, our study demonstrated safety, with no major adverse events, using IPL therapy. 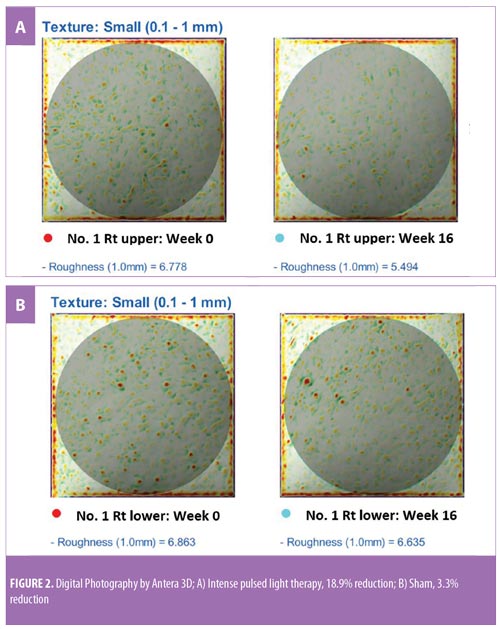 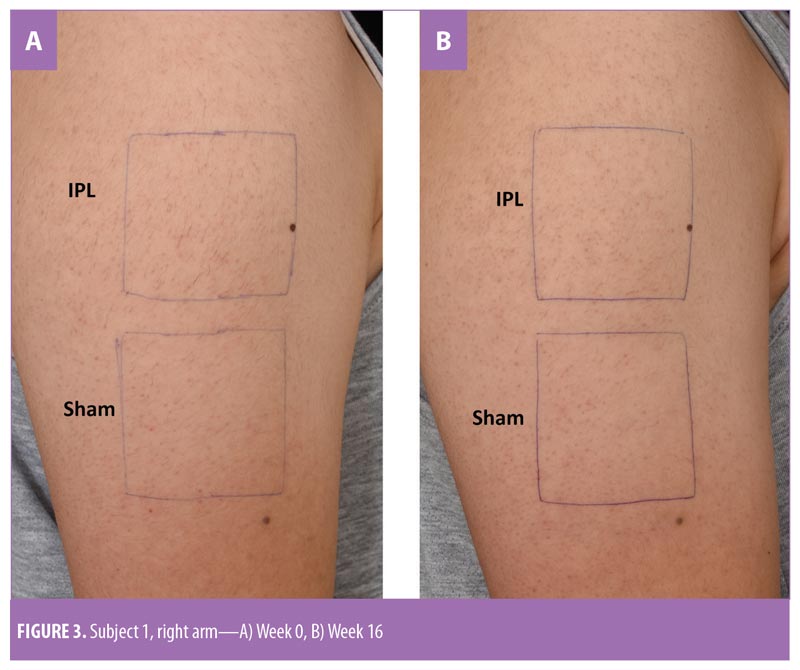 The strengths of our study are as follows: first, our IPL parameters are based on scientific data. As reported by Panchaprateep et al,2 the dermoscopic findings of KP lesions are those of fine-coiled hair embedded superficially in the epidermis, which correlate well with histopathologic findings. From these findings, a pulse width shorter than 20ms for thin hair would be appropriate for the treatment of KP. To find out the proper fluence for each subject, we performed test shots to obtain optimal endpoints—namely, perifollicular edema and erythema. However, the fluences had to be below 18J/cm2, according to the protocol suggested by the manufacturer, to prevent any adverse events. Moreover, we conducted parallel sham irradiation on control parts to minimize confounders and biases.

Limitations. Our study had a short follow-up period, which limited our ability to measure long-term results, including recurrence. Additionally, our study was conducted in Asian subjects with Fitzpatrick Skin Types III to IV. Therefore, parameters might need to be adjusted for different skin types and ethnic backgrounds. Finally, the reduction or disappearance of hair follicles and follicular plugging was not confirmed by histopathology.

We demonstrated that four monthly sessions of IPL therapy significantly improved KP in Thai subjects, particularly in regard to skin roughness. Our results indicate that this mode of treatment is safe and effective, suggesting that the IPL device could potentially be considered a first-line treatment option for KP. Additional randomized, controlled studies with larger patient samples and more diverse skin types are needed to support our findings.