Treatment of Moderate-to-severe Acne Vulgaris in a Hispanic Population: A Post-hoc Analysis of the Efficacy and Tolerability of Clindamycin 1.2%/ Benzoyl Peroxide 3.75% Gel 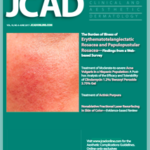 Disclosure: Dr. Alexis is an Advisory Board member for Galderma, Allergan, Novan L’Oreal, and Foamix and an Investigator for Allergan, Galderma, Novan, and BiopharmX. Dr. Cook-Bolden was a principle investigator in the Phase 3 clinical study and an advisor to Valeant Pharmaceuticals North America, LLC. Dr. Lin is an employee of Valeant Pharmaceuticals.

Background: Acne vulgaris (acne) is highly prevalent in the Hispanic population as it is in other racial/ethnic groups. While nuances in the presentation, quality-of-life impact, and approach to therapy of acne have been reported in various racial ethnic groups and skin types, data on the Hispanic population are limited, and yet they are the fastest growing population in the United States. Potential for irritation, dryness, and pigmentary alteration (due to acne and/or treatment) are key concerns in the management of acne in Hispanic populations. Evaluation of the efficacy and tolerability of topical therapies in this growing segment of the population is therefore important. Methods: A post-hoc analysis of efficacy and cutaneous tolerability in 136 Hispanic subjects receiving clindamycin phosphate 1.2%/benzoyl peroxide (BP) 3.75% gel or vehicle from a 12-week, multicenter, double-blind study of 498 subjects with moderate-to-severe acne. Data was compared to that seen in the non-Hispanic population in the Phase 3 study. Results: Mean reductions in inflammatory and noninflammatory lesions (63.6% and 54.3%, respectively) were significantly greater with clindamycin phosphate 1.2%/BP 3.75% gel versus vehicle (P=0.001 and 0.008, respectively) and numerically greater than the reductions seen in the non-Hispanic population. Treatment success, a 2-grade reduction in severity from baseline (36.5%), was also greater than vehicle at Week 12. Cutaneous tolerability was excellent with all mean scores less than or equal to 0.2 at Week 12 (where 1=mild). No subjects discontinued due to adverse events. Conclusion: Clindamycin phosphate 1.2%/BP 3.75% gel was well tolerated and efficacious in the Hispanic population. Compared with the general population, Hispanic acne subjects were not found to be more susceptible to cutaneous irritation from treatment with clindamycin phosphate 1.2%/BP 3.75% gel. J Clin Aesthet Dermatol. 2017;10(6):36–43.

Hispanics are racially, geographically, politically, culturally, and socioeconomically diverse. They are the fastest growing population in the United States, and acne is reported as the most common dermatologic diagnosis seen in this population.[1],[2] In one study of women aged 10 to 70 years with acne seen at a hospital-based dermatology practice in New York City, clinical acne was more common in Hispanics (32%) than Caucasians (24%).3 A study of 3,000 Latino patients seen in a private practice setting and hospital-based clinic showed acne to be one of the three most common diagnoses in this patient population.1 In Hispanics, the most disturbing feature of acne is not the active lesion, but the resulting postinflammatory hyperpigmentation (PIH) and keloidal scarring arising at sites of moderate-to-severe acne, which is very important to keep in mind when treating these patients. Many Hispanic patients are prone to dryness and irritation as a result of treatment, and this can lead to further inflammation and PIH.4 It is best prevented by early intervention using combination therapy.[5],[6] Despite their growing importance in the United States, there are few clinical studies that evaluate the safety and efficacy of topical acne preparations in Hispanics. It is important to balance the need for aggressive early intervention, especially in more severe disease, and it is important to consider the use of treatments that might increase tolerability and limit skin irritation.[7] Approximately 1 to 5 percent of the population is sensitive to benzoyl peroxide (BP), but many can tolerate BP concentrations below 5%.[8] Some physicians have concerns with the use of retinoids due to their potential to include an irritant contact dermatitis, which could lead to PIH.9 The safety and efficacy of clindamycin phosphate 1.2%/BP 3.75% gel in moderate-to-severe acne has been established in a multicenter, randomized, double-blind study involving almost 500 patients.10 Here, the authors provide a post-hoc analysis of the Hispanic subpopulation in this study.

A total of 498 patients with moderate-to-severe facial acne, aged 12 years and older, were randomized (1:1) to receive clindamycin phosphate 1.2%/BP 3.75% gel or vehicle in a multicenter, double-blind, controlled, 12-week study. The study was conducted in accordance with the Declaration of Helsinki and good clinical practices, and in compliance with local regulatory requirements. All subjects provided written informed consent before entering the study. Before randomization, patients were stratified by severity of acne vulgaris (Evaluator Global Severity Score [EGSS], ranging from 0 [clear] to 5 [very severe]). They were dichotomized into a moderate acne group (EGSS of 3) and severe acne group (EGSS of 4).

The post-hoc analysis included 136 Hispanic acne subjects (27.3% of the total study population) who were randomized to clindamycin phosphate 1.2%/BP 3.75% gel or vehicle.

Study population. Eligible subjects for the post-hoc analysis included male and female Hispanic patients aged 12 to 40 years, with moderate-to-severe acne (a score of 3 or 4 on the EGSS), who presented with 20 to 40 inflammatory lesions (papules, pustules, and nodules), 20 to 100 noninflammatory lesions (open and closed comedones), and two nodules or less.

Safety was also evaluated through reported adverse events (AEs), which were summarized by treatment group, severity, and relationship to treatment.

P-values for treatment success (EGSS) were obtained from a logistic regression with factor of treatment group. Values were adjusted for multiple imputation. Differences in patient-reported outcomes were assessed using a Cochran-Mantel-Haenszel general association test, stratified by analysis center. Statistical significance was based on 2-tailed tests of the null hypothesis resulting in P-values of 0.05 or less.

All AEs occurring during the study were recorded and classified on the basis of medical dictionary for drug regulatory activities terminology for the safety population (MedDRA dictionary). Difference between treatment groups were assessed from Fisher’s exact test. Descriptive statistics were used to summarize cutaneous safety and tolerability scores at baseline, Weeks 2, 4, 8, and 12.

Demographic data were not significantly different across the two treatment groups. The mean age (standard deviation, SD) was 20.5 (6.43) years, and there were slightly more female patients (54.4% vs. 45.6% male patients) (Table 1 ).

There was no significant difference between the two treatment groups in terms of baseline lesion counts or EGSS. At baseline, the mean (SD) number of inflammatory and noninflammatory lesions was 26.2 (4.91) and 32.3 (14.29), respectively. Overall, the majority of patients (89.0%) had moderate acne (an EGSS of 3). There was a slightly higher proportion of severe acne patients treated with clindamycin phosphate 1.2%/BP 3.75% gel (12.5%) compared to vehicle (9.7%), but the differences were not significant (Table 1 ).

Acne severity (EGSS). Treatment success was defined as at least a 2-grade improvement in global severity by EGSS. At Week 12, 36.5 percent of patients treated with clindamycin phosphate 1.2%/BP 3.75% gel were considered treatment successes by the investigator, compared to 28.3 percent of those treated with vehicle. The differences were not statistically significant (P=0.326, Figure 3).

Patient assessment of severity (SSA). More patients treated with a clindamycin phosphate 1.2%/BP 3.75% gel assessed their acne as clear or almost clear at Week 12 compared to those treated with vehicle (35.0% vs. 30.8%), although the differences were not significant (P=0.591, Figure 4).

Safety. Treatment-emergent AEs were infrequent and unrelated to treatment with clindamycin phosphate 1.2%/BP 3.75% gel (N=4, nasopharyngitis and headache, Table 2). There were two AEs reported with vehicle (facial pain and swelling face) that were related to treatment.

Cutaneous safety and tolerability issues were rare with clindamycin phosphate 1.2%/BP 3.75% gel. When they did occur they were usually mild or moderate in severity. There was one report of severe itching (1.4%) with vehicle.

To our knowledge, this is only the second study that looks at the efficacy and tolerability of topical treatment in a Hispanic population with moderate-to-severe acne,11 although an earlier study of BP/clindamycin topical gel reported subanalyses in Hispanic patients with mild-to-moderate acne.[12]

In a post-hoc analysis of clindamycin phosphate 1.2%/BP 2.5% gel, efficacy was reported to be greater in the Hispanic subpopulation when compared with the total study population.[11] In the authors’ analysis, efficacy of clindamycin phosphate 1.2%/BP 3.75% gel was also greater than that seen with vehicle, and median percent reductions in inflammatory and noninflammatory lesions (67.1 and 58.9%, respectively) higher than those reported in the previous study (64.1 and 48.7%, respectively). Treatment success (at least a 2-grade reduction in acne severity) was also slightly better in our study (36.5 vs. 33.1%). Although the results from the different studies cannot be directly compared, it would perhaps be expected that a fixed combination with a higher concentration of BP (3.75% versus 2.5%) that uses the same formulation technology would lead to better efficacy results. However, one concern in using a fixed combination with higher BP concentration might be the potential for greater skin irritation and the resultant risk of PIH. The previous post-hoc analysis with clindamycin 1.2%/BP 2.5% gel reported that cutaneous tolerability was better in the Hispanic population compared to the overall study population. No Hispanic subjects in the authors’ analysis experienced severe local signs or symptoms or discontinued treatment due to AEs. Although the authors’ analysis did not directly compare the safety of clindamycin phosphate 1.2%/BP 2.5% gel in the Hispanic and non-Hispanic populations, there were no treatment-related AEs in the Hispanic subpopulation. In contrast, there were four treatment-related AEs reported for the overall study population (burning sensation, contact dermatitis, pruritus, and rash).

Data from controlled studies may differ from clinical practice. Although many studies have shown that combination of clindamycin and BP provides superior efficacy to each of the individual active ingredients,[13] it is not possible to determine the contributions from the individual active ingredients in the authors’ analysis. In addition, the Phase 3 study was not designed to specifically investigate the efficacy of clindamycin 1.2%/BP 3.75% gel in Hispanic patients.

The results of the authors’ post-hoc analysis suggest that a fixed combination of clindamycin 1.2%/BP 3.75% gel may be an effective, safe, and well-tolerated topical treatment for use in Hispanic patients with moderate-to-severe acne.
AcknowledgmentThe authors thank Brian Bulley, MSc (Konic Limited, UK) for assistance with the preparation of the manuscript. Valeant Pharmaceuticals funded Konic’s activities pertaining to this manuscript.