Abstract: Trousseau syndrome is a rare phenomenon in cancer patients characterized by superficial migratory thrombophlebitis. In this brief report, the authors describe three recent case presentations of patients without a prior history of cancer who were treated for cellulitis prior to be admitted to the hospital. All three patients were found to have “negative” testing on venous duplex scanning. Communication with the technicians and additional clinical and laboratory evaluations confirmed Trousseau syndrome as well as an underlying hematologic cancer in each patient. Dermatologists should be aware of the diagnostic limitations in the venous duplex scanning , especially when evaluating superficial veins or areas overlying pain, and should recognize the importance of communicating with the technician performing the procedure.

Superfcial migratory thrombophlebitis (SMT) is a commonly missed sign of malignancy, and rates of misdiagnosing it as cellulitis are estimated to be as high as 28 percent in hospital settings.1 There is a broad differential for erythematous skin, including cellulitis, but also many clinical mimickers that can be broadly described as pseudocellulitis. Outpatient diagnoses, such as lymphedematous rubor, dependent rubor, psoriasis, stasis dermatitis, stasis panniculitis, and pigmented purpuric eruptions, and SMT, are characteristic forms of pseudocellulitis.2 These cases are treated differently than cases of cellulitis. Treating pseudocellulitis with antibiotics, as is typical in the case of a cellulitis, could lead to antimicrobial resistance, hospital overuse, and a delay in proper treatment. Dermatologist expertise is often required for identification and proper treatment,3 as misdiagnosis by nondermatologist physicians is all too common.1

We report three cases of SMT that were misdiagnosed and admitted for cellulitis after venous duplex scans (VDS) were interpreted as normal. It is important to emphasize that pseudocellulitis can be life-threatening and/or indicate life threatening disease states and to note the limitations of the VDS. 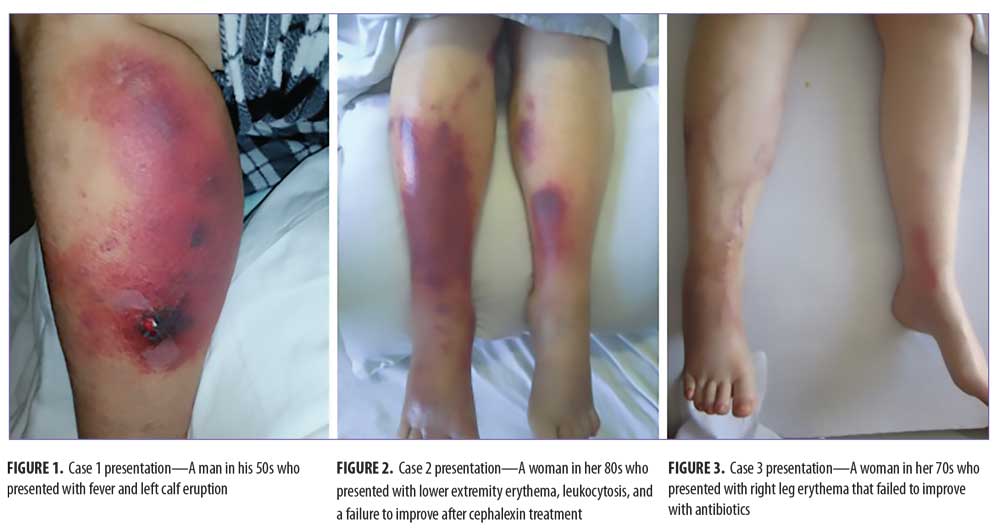 Case 1. A man in his 50s presented to the emergency department (ED) with fever and a left calf eruption (Figure 1). Although a VDS was “negative,” he was found to have leukopenia (2.1k/?l), thrombocytopenia (3.6k/?l), and nucleated red blood cells. A peripheral blood smear (PBS) showed blasts, presence of Auer rods, and tear drop cells, indicative of acute myelogenous leukemia (AML).

Case 2. A woman in her 80s with hypertension, peripheral neuropathy, and a previous pulmonary embolus was sent to the ED with lower extremity erythema, leukocytosis, and a failure to improve after cephalexin treatment. A physical exam showed linear, serpiginous erythema over the right arm, left medial thigh, and diffusely over the left medial tibia (Figure 2). Her VDS was “negative.” Flow-cytometry and a bone marrow biopsy demonstrated hypogranular AML. She was diagnosed with AML via bone marrow biopsy and treatment with decitabine was initiated. Subsequent clinical resolution of her thrombosis followed.

Case 3. A woman in her 70s with a history of anemia, asthma, and glaucoma was referred to the ED for right leg erythema that failed to improve with antibiotics. She was found to have leukocytosis to 325.8k/?l. A physical exam showed an erythematous cord, with significant pain along left medial malleolus. The right lower extremity exhibited a serpiginous streak along the lateral and posterior portion from the knee to the ankle (Figure 3). Streaks of pigmentation extended laterally from this longitudinal axis. Her lower extremity VDS was “negative.” After leukophoresis and during early initiation of tretinoin treatment, she suffered a cerebrovascular accident and her family opted for comfort care.

Serpiginous cord morphology and cord-like palpability are distinguishing features of SMT.4 Additionally, SMT preferentially afflicts the small and great saphenous veins of the lower extremities but can have a diffuse migrational distribution as well.5 The linear or serpiginous pattern of the purpura and palpable cord-like nodules, and the combination of both, almost certainly indicates superficial thrombophlebitis.  The distinct linear serpiginous cords and palpability are caused by a hypercoagulable state (conferred by tissue), cancer procoagulants activating coagulation factor VII, and leukocytotic sludging.5 Cancers that are commonly seen in-clinic in association with SMT are pancreatic cancer, other gastrointestinal cancers, and various leukemias.5

Up to 30 percent of cases are detected only after a follow-up VDS.6 Therefore, knowledge of the diagnostic test and its limitations is critical. In the three cases presented here, the patients were admitted with a primary diagnosis of cellulitis, not because SMT was not considered, but rather because the diagnostic test did not support it. VDS results are technician-dependent. SMT might be missed due to the following errors: failure to maximize venous pressure via patient positioning, lack of appropriate transducer frequency (7–12MHz), venous constriction secondary to cold room temperatures, and/or incorrect transducer positioning.7 Additionally, miscommunication could also contribute to diagnostic errors. Ultrasound technicians are often unaware that a patient has suspected SMT and, due to this miscommunication, the technicians fail to perform VDS within the affected inflammed area.  Furthermore, technicians might be hesitant to apply transducer pressure over the SMT due to patient pain. Technicians also do not generally evaluate the small saphenous vein without a specific request.