Drs. Gharib, Mostafa, and Elsayed are with the Dermatology Department, Faculty of Medicine, at Zagazig University in Ash Sharqia Governorate, Egypt.

ABSTRACT: Background: Botulinum toxin is a neurotoxin produced by the bacterium Clostridium botulinum that causes a flaccid muscle paralysis. It is currently used for aesthetic procedures and to treat focal hyperhidrosis. The botulinum toxin has also been used experimentally in many other dermatological conditions with positive results.

Objective: We sought to evaluate the efficacy and safety of intradermal injection of botulinum toxin A in the treatment of localized recalcitrant chronic pruritus in lichen simplex, inverse psoriasis, post-burn itching, lichen planus (hypertrophic), and postherpetic neuralgia.

Methods: This was a clinical trial study of 32 patients (12 with lichen simplex chronicus [LSC], 4 with inverse psoriasis, 4 with post-burning itch, 4 with lichen planus, 4 with hypertrophic lichen planus, and 4 with post-herpetic neuralgia). We used 2 to 3mL of unpreserved saline to dilute each vial (50 units) of botulinum toxin A. This led to a final concentration of 2 to 2.5U/0.1cc; injections were typically made into the dermis.

Results: The ages of patients in the group studied ranged from 13 to 85 years, with a mean of 37.38 years, and 59.4 percent were female. There were statistical reductions in visual analog scale in all the studied cases.

Conclusion: Botulinum toxin A appears to be a safe and effective therapy for the improvement of localized recalcitrant itching in LSC, inverse psoriasis, burns, hypertrophic lichen planus, lichen planus, and symptoms of postherpetic neuralgia.

Botulinum toxin type A (BoNTA) blocks the release of acetylcholine and many other neurotransmitters from the presynaptic vesicle by deactivating soluble N-ethylmaleimide-sensitive factor activating protein receptor (SNARE) proteins. After intradermal injection, efferent cholinergic innervation of sweat glands is completely blocked, making it a viable treatment option for focal hyperhidrosis.1

Lichen simplex chronicus (LSC) is characterized by intense localized pruritus without a discernible reason. It presents typically as a solitary erythematous patch with excoriations and accentuated skin markings, which are caused by prolonged and repeated scratching. Topical or intralesional corticosteroids are most commonly used for treatment of LSC. But in most patients, they do not permanently resolve the itchiness. 2

Recalcitrant pruritus is the main symptom of LSC, which is a localized variant of atopic dermatitis (AD). Acetylcholine has been demonstrated to mediate pruritus in AD. It was hypothesized that localized pruritus in LSC, if mediated by acetylcholine sensitive C-fibers, could be blocked by intradermal botulinum toxin type A injections. In LSC, most patients stated they no longer had an uncontrollable need to scratch.3

Treatment of inverse psoriasis can be difficult and requires a different approach to the more common cutaneous forms of the disease due to the sensitivity of skin in the susceptible areas. Steroid creams and ointments are considered very effective, but misuse of steroids, particularly in skin folds, can result in adverse effects, especially thinning of the skin and stretch marks.5

The use of BoNTA in inverse psoriasis might act at the neuroglandular junction level to reduce local sweating and prevent the consequent skin maceration and secondary infection. Additionally, BoNTA might act at the extra-junction level to inhibit the liberation of neuropeptides and other proalgogenic substances responsible for inflammation, hyperkeratosis, and pain transmission.6

Itching is a common secondary symptom related to burn injuries. Several medications have been identified and used to manage this condition. BoNTA has also been considered as an option. According to Akhtar and Brooks,7 administration of BoNTA in patients with burn injuries led to an improvement in itch intensity within four weeks. Considering this, BoNTA might be an option for burn-associated itches that are resistant to conventional therapies.

Hypertrophic lichen planus (HLP) is considered a variant with fine adherent scales. Compared to classic LP, the hypertrophic variant is perceived as more pruritic, appears commonly on the pretibial areas and ankles, and has an increased risk of developing into squamous cell carcinoma. Furthermore, HLP often appears more resistant to standard topical treatment and represents a therapeutic challenge.8,9

Postherpetic neuralgia (PHN) is the most frequent complication of herpes zoster. It is described as pain persisting for three months or more after the onset of a rash in the same affected dermatome. In most cases, pain improves progressively; only in 1 to 2 percent of cases does pain persist for years.10

The mechanism of action in BoNTA in decreasing pain is not understood; however, there are many theories regarding its mechanism. It mainly acts by inhibiting the release of pain mediators such as substance P, glutamate, and calcitonin gene-related protein from the nerve terminals and dorsal root ganglions, thus reducing inflammation around the nerve endings, deactivating sodium channels, and exhibiting axonal transport.2

The aim of this work was to evaluate the efficacy and safety of intradermal injection of botulinum toxin A in the treatment of localized recalcitrant chronic pruritus in lichen simplex, inverse psoriasis, postburn itching, lichen planus (hypertrophic), and PHN.

Patients. This clinical trial study was carried out in the Dermatology, Venereology, and Andrology Departments, Faculty of Medicine, at Zagazig University Hospitals in Egypt from January 2018 to July 2019 (Institutional Research Board number 4218). This study included 32 patients (12 with LSC, four with inverse psoriasis, four with post-burning itch, four with lichen planus, four with HLP, and four with PHN).

A preoperative information sheet and informed consent was obtained from all patients. Photographs were taken of each patient before treatment and after each session of therapy to evaluate their clinical improvement. Assessment of treatment was performed for each patient, including physician, photographic, and patient assessments.

Reconstitution of BoNTA vials. To dilute each vial, 2 to 3mL of unpreserved saline were used. This led to a final concentration of 2–2.5U/0.1cc. The rubber stopper was removed before dilution. Great care was taken to gently inject saline into the bottle without shaking. Thus, bubbles did not appear, and the toxin did not lose its potency. The vial was stored at 2 to 8°C and used within 2 to 4 hours after reconstitution.

An intradermal injection technique was used with a 1cc syringe and a small gauge needle. At each injection site, a small amount of solution was applied, containing about:

BoNTA injected into the dermis over the area of lesion needed to create a wheal 0.2 to 0.4 cm in diameter. Total dosages ranged from 50 to 100U, depending on the extent and severity of the affected area. All patients were asked not to use any other treatment during the treatment assessment. 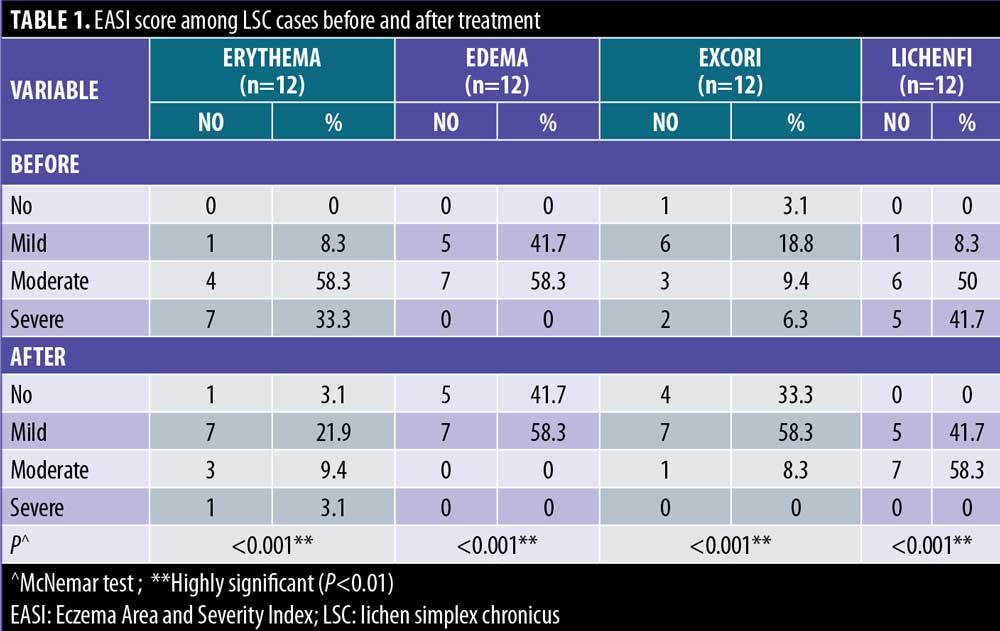 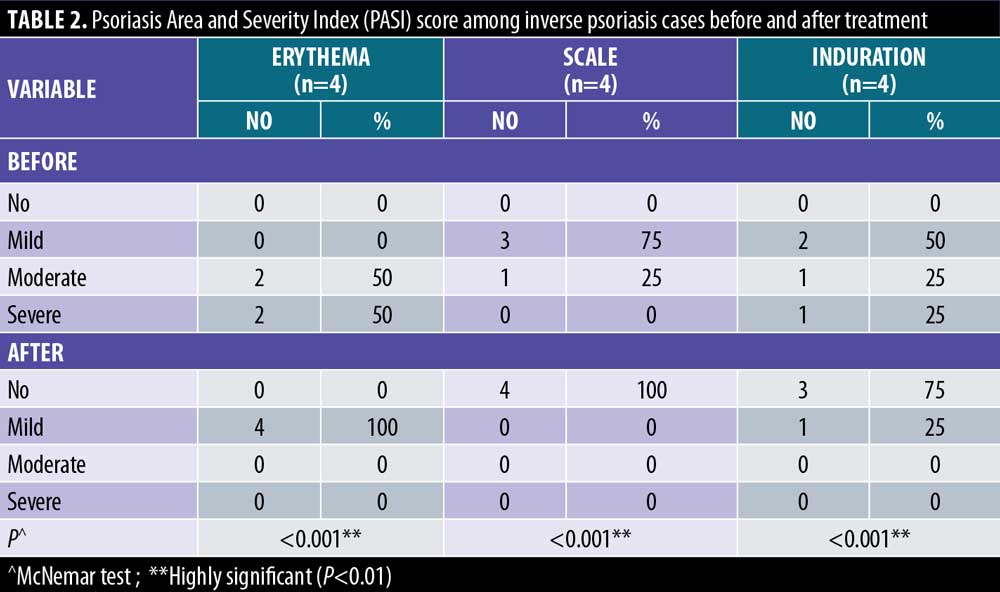 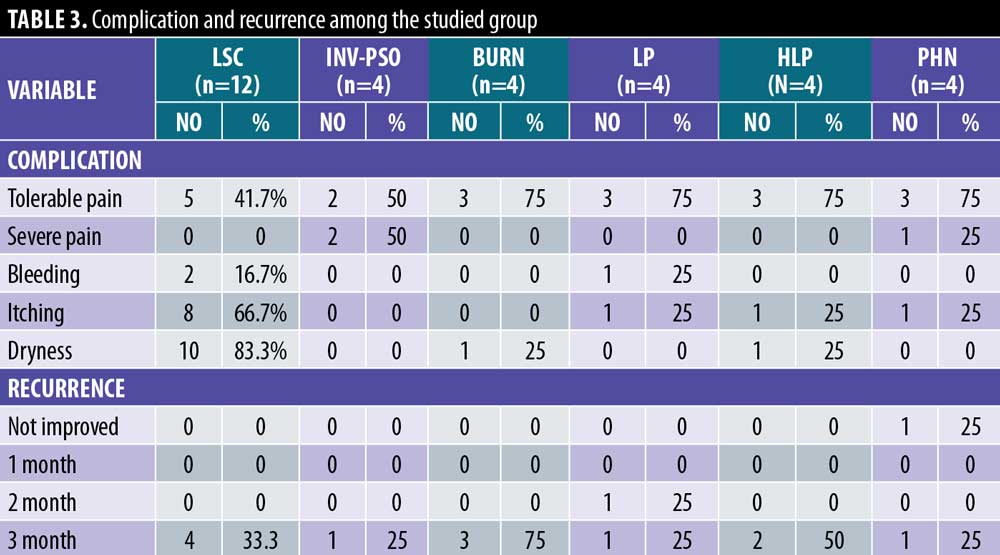 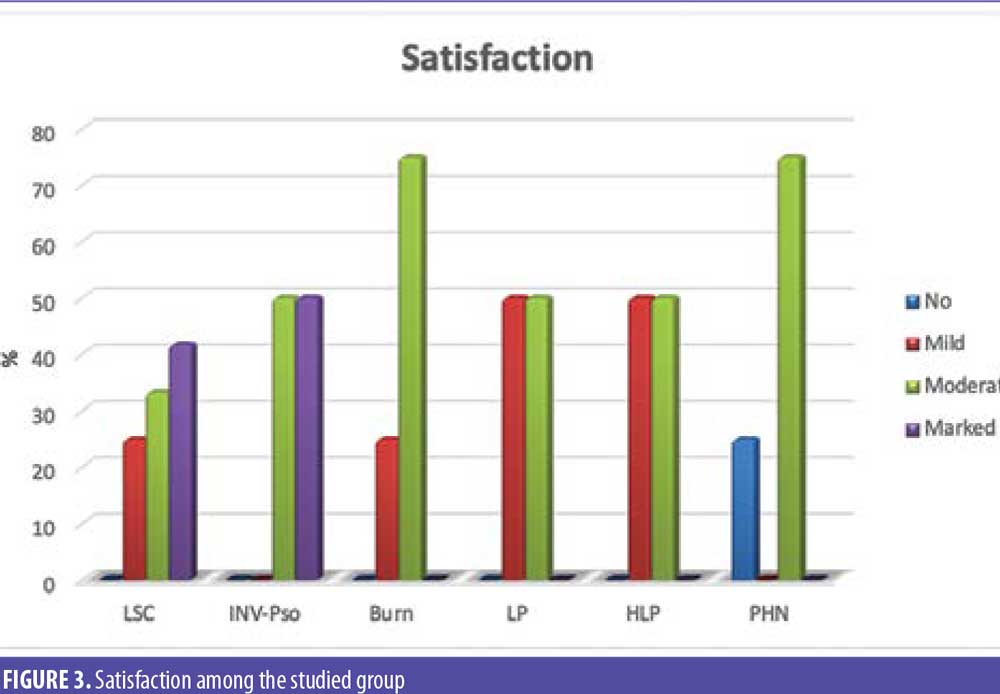 BoNTA has shown potential in the medical literature as an antipruritic agent for patients with localized, chronic pruritus that is refractory to conventional therapies. BoNTA is believed to reduce pruritic symptoms by reducing the transmission of C-fiber itch signals; it has an effect on small fiber neuropathies by altering the transmission of neural input from the peripheral nervous system.11,12

The Zanchi et al6 study on BoNTA therapy resulted in improvements in both subjective patient symptomatology, specifically pain and itch, and objective reductions (87%) in erythema and maceration in the treated areas, according to photographic evidence. This is in agreement with our study, which had objective reductions of erythema and maceration of 100 percent. Thus, the hypothesized effects of BoNTA in reducing local sweating and reduced liberation of neuropeptides and proalgogenic substances responsible for inflammation and pain are confirmed.

Our findings show a statistically significant reduction in the VAS score in all cases, with means of 6.5 before and 3.5 after in post-burn itching after injection, similar to Akhtar and Brooks.7 Their study had a relatively rapid onset of action, with all patients reporting a substantial reduction in symptoms within one-week post injection, and a reduction in VAS with a mean of 8.37 before and 1.25 after.

In agreement with our results, 75 percent of patients had a statistically significant VAS reduction, with a mean of 8.33±0.89 before and 4.25±1 after. Heckmann et al3 reported that lichen simplex–associated pruritus can be overcome by intradermal botulinum toxin A injection. Acetylcholine appears to be a dominant pruritic mediator in this condition. Botulinum toxin A was injected intradermally into five circumscribed lichenoid lesions in four patients suffering from recalcitrant pruritus. No corticosteroids or any other specific topical therapy was administered. Pruritus subsided within 3 to 7 days in (75%) of patients, according to VAS. All lesions cleared completely within 2 to 4 weeks.

In addition, we observed significant reduction in VAS in patients who suffered from PHN, with a mean VAS before of 8.75 and 6.01 after. This is in agreement with Emad et al,13 who showed that intradermal injection of botulinum toxin decreases pain in PHN with a mean VAS 9.8 before treatment and 6.4 after. However, with a mean VAS of 7.6, one month after the injection, the patients had less pain in comparison.

Also, a randomized clinical trial was conducted by Xiao et al14 on 20 subjects affected by PHN, with a mean VAS before of 7.6. Patients reported a decrease in pain and the mean VAS score of 3.1 was more significant than that in the control groups. It is interesting to note that for this indication, BoNTA was administered not only subcutaneously but also intradermally. The injection of botulinum toxin might reduce various substances that sensitise nociceptors, and its analgesic potential is one of the most important opportunities for neuropathic chronic pain.15

A study from Arezzo16 which included seven patients with PHN showed that botulinum injections also decreased pain. These patients had pain in the trigeminal, thoracic, and back regions. Before the injection, their mean VAS was eight; this decreased to five after treatment. Also, in LP and HLP there were statistically significant reductions in VAS.16

Overall, these studies suggest the potential for BoNTA to relieve symptoms in patients with localized chronic pruritus caused by lichen simplex, inverse psoriasis, lichen planus (HLP), partial- to full-thickness burns, and PHN that are refractory to conventional therapy, with some patients reporting significant improvements and others reporting less effect. BoNTA is an expensive treatment; thus, it must be considered a subsidiary one if there is no improvement with other treatment.17

Patient selection is important for obtaining the best results. Considering our results, BoNTA appears to be a safe and effective therapy for the improvement of localized recalcitrant itching in LSC, inverse psoriasis, burns, HLP, lichen planus, and PHN.

Given these limitations, it is too early to recommend the regular use of BoNTA in the treatment of chronic localized pruritus; however, based on the results of the present data, we suggest intradermal BoNTA injection as an effective option for the clinician in cases of recalcitrant localized pruritus.