Efficacy of Topical Timolol 0.5% in the Treatment of Acne and Rosacea: A Multicentric Study 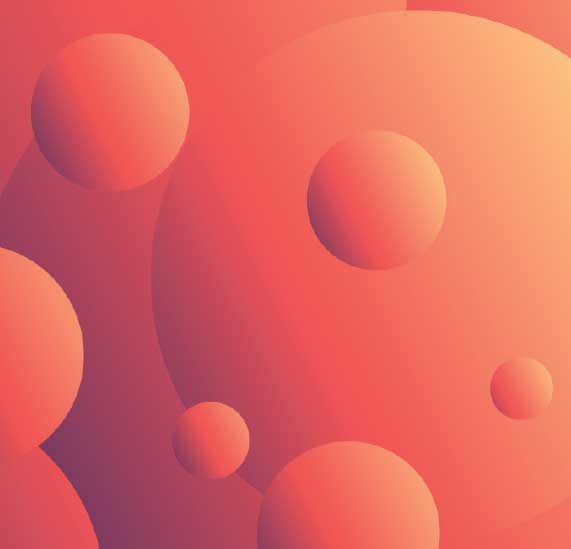 Objectives. We assessed the clinical efficacy and safety of topical timolol maleate 0.5% for the treatment of acne and rosacea.

Results. The severity of both acne and rosacea decreased relative to baseline; however, the improvement in rosacea was not statistically significant.

Conclusion. In our study, topical timolol maleate 0.5% demonstrated effectiveness in the treatment of acne, especially in noninflammatory lesions, but seems to be more effective in erythematotelangiectatic rosacea than papulopustular rosacea lesions, with insignificant side effects. The addition of topical timolol to the standard treatment protocol for acne and rosacea is expected to be beneficial, especially by way of improving comedones of acne and resistant inflammatory erythema of both acne and rosacea.

Acne vulgaris, a pilosebaceous unit disorder, is characterized by noninflammatory lesions, such as comedones, and inflammatory lesions, such as papules, pustules, and nodules.1 Different etiological bases have been implicated in the pathogenesis of acne, including abnormal keratinization of the pilosebaceous duct, androgen-stimulated sebum production, and Propionibacterium acnes proliferation with subsequent inflammation. Genetics, oxidative stress, and nutrition are also involved in the pathogenesis of acne.2

Rosacea is a chronic inflammatory skin condition, the etiopathogenesis of which is not completely understood. Demodex folliculorum, immune dysregulation, and abnormal neurovascular signals are all involved in the pathogenesis of rosacea. Rosacea has main four types: erythematotelangiectatic (ETR), papulopustular (PPR), phymatous, and ocular. Facial erythema, telangiectasia, and inflammatory papules and pustules are the most commonly reported features.3 Blood vessel abnormality is an important factor in the pathogenesis of rosacea that results in the characteristic flushing, persistent redness, and visible blood vessels. The cause of blood vessel inflammation is still unknown.4 Acne and rosacea can have long-lasting psychosocial sequelae that affect the patient’s quality of life. Moreover, the treatment of both is still a challenge.5,6

Timolol is a nonselective beta-blocker that has been used for treating hemangioma. It causes vasoconstriction, induces apoptosis, and inhibits angiogenic factors, such as vascular endothelial growth factor (VEGF), and inflammatory mediators, such as matrix metalloproteinase (MMP)-2, MMP-9, and interleukin (IL)-6.7

Timolol, through its anti-inflammatory properties, might provide a new treatment option for acne and rosacea, because inflammation is known as a fundamental factor in the pathogenesis of both diseases.8,9 In addition, timolol can improve erythema and flushing in rosacea by inhibiting beta-adrenergic receptors on the smooth muscles surrounding blood vessels, leading to vasoconstriction of these vessels.9

Accessibility, cost-effectiveness, a simple mode of application, and a low incidence of drug reactions are major advantages of topical timolol.10

Patients. This was a multicentric study that included adult and adolescent patients with either acne or rosacea. One hundred forty patients with acne and rosacea were recruited from the outpatient clinics at three locations: Zagazig University Hospital, Al Haud Al Marsaud Dermatology Hospital, and Zagazig General Hospital. Of these, 58 patients with ETR or PPR rosacea and 58 patients with mild or moderate acne were included in the study from December 2016 to October 2017. Participants were excluded if they had received any treatment 30 days prior to the study, had an allergy to beta-blockers, were pregnant or lactating, or had hypotension, bradycardia or heart failure, myocardial infarction or arrhythmia, asthma, or bronchospasm. The study was approved by the Zagazig University Hospital Institutional Review Board, and informed consent and photoconsent was acquired from each patient before the start of the study.

A thorough history was recorded for each patient, including family history of acne or rosacea, drug intake, and disease onset, course, and duration. Patients were also asked about any aggravating factors, including food, stress, or associated symptoms. Finally, each patient completed a general examination to detect any other systemic issues or associated disease.

For patients with acne, severity was scored using the Global Acne Grading System (1–18=mild; 19–30=moderate; 31–38=severe; and 39=very severe).11 After a baseline evaluation of acne severity, mild and moderate cases were selected for the study.

For rosacea, patients with ETR and PPR types were included in the study. Rosacea severity was assessed using two measures­—the Investigator’s Global Assessment (IGA)  score and a rosacea clinical scale, where 1=clear and 5=severe.12  Each patient in both groups was instructed to apply 4 to 8 drops of topical timolol 0.5% on the affected areas of the face every night before bedtime for eight weeks.

Assessment of the therapeutic response and follow-up. Patient response to the therapy was assessed every two weeks for eight weeks. For patients with acne, the response to treatment was evaluated by assessing the number of comedones, papules, and pustules and comparing the values of the following two formulations before and after treatment:

For patients with rosacea, the response to treatment was evaluated by assessing the degree of erythema, telangiectasia, papules, and pustules according to the rosacea clinical scale and by reassessment of the IGA scale scores. Treatment was deemed successful if patients achieved an IGA score of “clear” or “almost clear” (IGA score of 0–1). The percentage of participants with each score at the end of treatment was provided. Patients who achieved a “clear,” “minimal,” or “mild” IGA result after eight weeks of treatment were considered responders, while those with an IGA score of “moderate” or “severe” were considered nonresponders. Adverse effects were evaluated at each follow-up visit.

Statistical analysis. Data analysis was performed using the SPSS Version 21 software program (IBM Corp., Armonk, New York). Quantitative variables were described using means and standard deviations (SDs), while categorical variables were described using absolute frequencies. Kolmogorov-Smirnov (distribution-type) and Levene (homogeneity of variances) tests were used to verify assumptions for use in parametric tests. To compare means, an independent-samples t-test and one-way analysis of variance were used when appropriate. Nonparametric testing (Mann–Whitney U) was used to compare means when data were not normally distributed and to compare medians in categorical data. To evaluate the effect of therapy, a paired-samples t-test (when data were normally distributed) and the Wilcoxon test (when data were not normally distributed) were used. To evaluate the association between categorical variables, Pearson’s chi-squared test was used. The level of statistical significance was set at five percent (p less than or equal to 0.05). 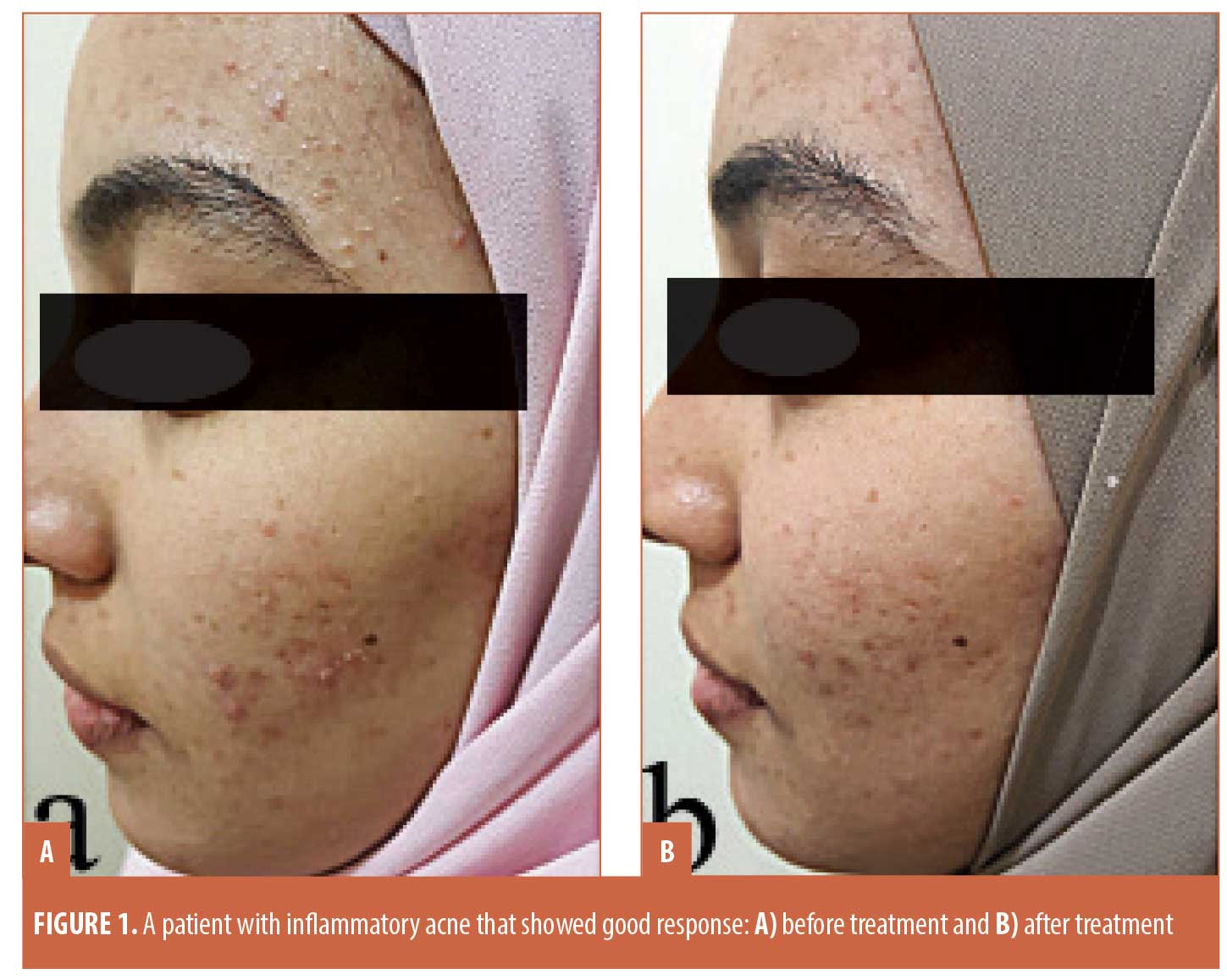 Acne, one of the most common skin diseases, affects approximately 85 percent of the global population at some point in life and occurs most prominently on skin sites with a high density of sebaceous glands, such as the face, back, and chest. However, acne can affect all areas of the body, except the palms and soles, due to the lack of sebaceous glands on these regions.14

Rosacea is a chronic facial inflammatory dermatosis that poses a therapeutic challenge due to its multifactorial pathogenesis.15

Timolol maleate is a potent nonselective beta-blocker, that causes a combination of vasoconstriction, inhibition of angiogenic factors, such as VEGF, inhibition of the inflammatory mediators, and induction of apoptosis.7 The anti-inflammatory action of timolol could be useful in the treatment of acne and rosacea, due to the inflammatory pathogenesis of both skin conditions. Also, nonselective beta-blockers like timolol are thought to decrease erythema and flushing in rosacea by inhibiting beta-adrenergic receptors on the smooth muscles surrounding blood vessels, leading to vasoconstriction of these vessels, and by inhibition of the angiogenic factors, such as VEGF.11

To the best of our knowledge, there are few studies that assess the efficacy of topical timolol in the treatment of acne and rosacea. Thus, the present study was carried out to assess the efficacy and safety of topical timolol maleate 0.5% in the treatment of mild-to-moderate acne and rosacea (ETR and PPR types). After eight weeks of treatment, the severity of acne and rosacea decreased from baseline; however, the improvement in rosacea was not statistically significant. More specifically, in the patients with acne, there was a highly statistically significant reduction in comedones, papules, TLC, and ASI from baseline, with a significant reduction in pustules. The best clinical improvement was observed in noninflammatory lesions (i.e., comedones). Theoretically, this finding might be attributed to timolol’s vasoconstrictive effect, which could possibly decrease the blood flow to sebaceous glands, causing a subsequent decrease in sebum production. In this study, timolol was associated with minimal, tolerable side effects, including dryness, burning, stinging, erythema, and mild irritation. These side effects were regressed by the use of emollients.

When comparing our results to those of previous studies of acne treatments, retinoids and benzoyl peroxide (BPO) appear to be more effective than timolol, especially in reducing inflammatory lesions; the available literature indicates that retinoids reduce the number of comedones and inflammatory lesions between 40 and 70 percent, while BPO reduces TLC between 72.7 and 75.0 percent.16,17 However, timolol appears to be better tolerated and associated with milder side effects than retinoids.

Emerging studies indicate a decrease in effectiveness of topical antibiotics for the treatment of inflammatory acne lesions, likely due to the emergence of antibiotic-resistant bacteria.16 Timolol maleate has the advantage of avoiding bacterial resistance, and the percentage of improvement in TLC with timolol is close to that currently achieved with topical antibiotics.

Among the patients with rosacea in our study clinical parameters of rosacea were improved by timolol administration; however, this improvement was not statistically significant. Cases of telangiectasia had the highest mean percentage of improvement (50%), followed by erythema (41.38%), while the mean percentage of improvement for papules and pustules was 7.41 percent and that for severity according to rosacea score was 27.99 percent. The superior therapeutic response seen among cases of telangiectasia and erythema might be explained by the inhibitory action of timolol on beta-adrenergic receptors on the smooth muscles surrounding blood vessels, leading to the vasoconstriction of these vessels.

Commonly used treatments for rosacea, such as ivermectin, permethrin, topical calcineurin inhibitors, and metronidazole are all effective mainly on inflammatory papules and pustules, with unsatisfactory, poor effects on persistent erythema and telangiectasia,18,19 while timolol affects mainly telangiectasia and erythema. Thus, the combination of timolol and one of these other options might yield an even better result on all rosacea manifestations.

Separately, alpha-receptor agonists, such as brimonidine gel and oxymetazoline, can effectively decrease the persistent erythema of rosacea.20 However, they have not been shown to be effective in improving telangiectasia. Also, some patients treated with brimonidine gel have been shown to develop a paradoxical increase in facial erythema either during treatment or after treatment. This phenomenon might result from the stimulation of endothelial cell alpha-2 receptors with subsequent release of NO that invokes vasodilation.21,22

Laser and light-based therapies, such as pulsed dye laser and potassium titanyl phosphate, have shown effectiveness in reducing telangiectasia, with a limited effect on erythema, in patients with rosacea and posttreatment purpura and postinflammatory hyperpigmentation.23 Timolol, however, is less expensive than laser and light-based therapies, which is an important advantage, especially in developing countries.

Limitations. This is not a controlled study. More studies are needed to investigate the ideal period of treatments, determine the expected time until remission from the treatment, and determine the ideal maintenance schedule of this treatment to maintain improvements in acne and rosacea.

Timolol was effective in reducing noninflammatory lesions of acne and symptoms of erythematotelangiectatic rosacea. Timolol was less effective in treating papulopustular rosacea. Minimal side effects were observed. We believe timolol is a safe, effective adjunctive therapy for acne and rosacea.