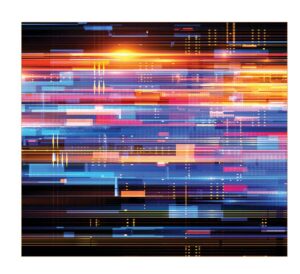 FUNDING: No funding was provided for this article.

DISCLOSURES: The authors report no conflicts of interest relevant to the content of this article.

ABSTRACT: Introduction. Proteasome subunit beta type-8 (PSMB8) is a protein that contributes to the complete assembly of 20S proteasome complexes, which play a role in the pathogenesis of vitiligo.

Objective. The study aimed to evaluate the association between PSMB8 gene polymorphisms with vitiligo to assess its clinical significance among a sample of Egyptian patients with vitiligo.

Results. There was a significant difference between PSMB8 genotypes and alleles distribution in patients and control groups. Ten percent of the study sample had sensorineural hearing loss. The patients with hearing loss were significantly older (P=0.0002), had significantly later age of onset (P=0.0007), longer duration (P=0.0021), higher body mass index (BMI) (P=0.045), and higher vitiligo area scoring index (VASI) scores (P=0.0015). All patients had extensive forms of vitiligo (generalized and universal). Regarding the VIT rs2071543 polymorphism, all of the patients with hearing loss were carrying the CA and AA genotypes. None of the patients carried the reference genotype, CC. The A allele of VIT rs2071543 was significantly associated with hearing affection (P=0.024).

Conclusion. In our study, PSMB8 polymorphism was associated with the susceptibility to develop vitiligo and appeared to have clinical significance among the studied group of patients. Factors predicting auditory abnormalities should be further studied for early detection and management.

Vitiligo is a depigmenting disease that results from the absence of melanocytes in affected areas of the skin.1 Many theories have been proposed to explain this melanocyte absence; these include immunological, genetic, neural, cytotoxic, melanocytorrhagy, and oxidative stress theories.2

Proteasome subunit beta type-8 (PSMB8) (also known as 20S proteasome subunit iBeta5) is the constitutive proteasome which represents the proteolytic portion of the 26S proteasome (immunoproteasome). Antigen presenting cells show abundant 26S proteasome expression,3 where it performs an essential role in antigen processing and presentation to cytotoxic T lymphocytes via major histocompatibility complex (MHC) class I molecules.4 Moreover, it has a regulatory effect on the T cell polarization and macrophage activation with subsequent involvement in the etiopathogenesis of many autoimmune inflammatory disorders.5 Serum proteasomes may be considered as inflammatory markers in certain autoimmune diseases (e.g.,  systemic lupus erythematosus, Sjogren’s syndrome, and rheumatoid arthritis).6

Polymorphisms of the PSMB8 gene are involved in the development of some autoinflammatory disorders, such as Nakajo-Nishimura syndrome7 and chronic atypical neutrophilic dermatosis with lipodystrophy and elevated temperature (CANDLE) syndrome.8 These gene polymorphisms have been also studied in vitiligo in a sample of Indian patients;9,10 however, it has not been investigated enough in different ethnic populations.

Subjects. The study included 100 patients with different clinical presentations of vitiligo, in addition to 100 healthy, vitiligo-free individuals of matched age, sex, and body mass index (BMI) as a control group. All participants were recruited from the outpatient clinic of the Dermatology Department of Benha University after approval of the study by the Ethics Committee on research involving human subjects. Informed consent was obtained from all participants prior to the start of the study.

All patients were subjected to full history taking and dermatological examination to assess the distribution and the extent of the vitiliginous patches. Vitiligo severity was evaluated using the vitiligo area severity index (VASI).11

DNA extraction and genotyping. Peripheral blood samples from all participants were extracted in a tube with ethylenediamine tetraacetic acid (EDTA), and genomic DNA was isolated with GeneJET Genomic DNA Purification Kit (Cat. No K0721) (Qiagen, Germany). After extraction, the concentration and purity of genomic DNA were quantified spectrophotometrically by ultraviolet (UV) absorbance using Nanodrop (Thermo Scientific; Wilmington, Delaware). The quality of DNA was assessed with a 260/280 ratio; a value of 1.8 to 2 was considered of good quality. Allelic discrimination was performed using the Taqman single nucleotide polymorphism (SNP) ready-made assay (Qiagen; Hilden, Germany) which includes TAQMAN UNIVERSAL MMIX II (Cat. NO 4440043) and TAQMAN SNP ASSAYS MTO HUMAN SM (Cat. NO 4351379). The TaqMan genotyping assay (40X) consisted of forward primer, reverse primer, and two probes. The forward primers’ sequences were 5’TCCCTAGGGGCTTCCCTACTGC-3 and 5’TTGATTGGCTTCCCGGTACTG-3; and the reverse primers’ sequences were 5’ TCGATCTGTGGCTTTCGCTTTC-3 and 5’TCTACTACGTGGATGAACATGG-3 for PSMB8 rs2071543 and the 6 intron at 37360 site, respectively. The sequences of the two probes  were VIC ACTCCTTTCACCTATTCCCAAGGCCT-MGB-NFQ (normal probe 5′-3′) and FAM-CAGCTACACCTGTATGTAGGCTAGA MGB-NFQ (mutant probe 5′-3′).

The probes were designed with minor groove binder (MGB) and nonfluorescent quencher (NFQ) at the 3′end, whereas the 5′end contained the fluorescence reporter dyes 2′-chloro 7′-phenyl-1, 4-dichloro-6-carboxyfluorescein (VIC) or 6-carboxyfluorescein (FAM). The wild type probe was labeled with VIC dye, while the variant probe was labeled with FAM dye. Real-time PCR was performed in a volume of 20ul using Rotorgene real-time PCR system (Qiagen; Hilden, Germany). The reaction was set with 1X TaqMan Universal Master Mix, 1X Taqman assay, and the reaction volume was completed by nuclease free water. Thermal cycling conditions were as follows: 60 degrees Celsius for 30 seconds, 95 degrees Celsius for 10 minutes, 40 cycles of denaturation at 95 degrees Celsius for 15 seconds, and annealing/extension at 60 degrees Celsius for one minute.

Statistical analysis. Data were tabulated and analyzed using the Statistical Package for the Social Sciences (SPSS) version 25. Data were summarized using mean, standard deviation, median, minimum, and maximum in quantitative data and using frequency (count) and relative frequency (percentage) for categorical data. Comparisons between quantitative variables were done using the nonparametric Kruskal-Wallis and Mann-Whitney tests. For comparing categorical data, Chi-square (X2) test was performed. Exact test was used instead when the expected frequency was less than five. Genotype and allele frequencies were compared between the disease and the control groups. Odds ratio (OR) with 95% confidence intervals (CI) was calculated using binary logistic regression. P-values less than 0.05 were considered statistically significant.

The mean disease duration was 6.68±6.39 years. Fifty-one percent of patients reported stress as a provocative factor for the disease, and 36 percent gave a positive history of Koebnerization. Hearing was impaired in 10 percent of patients, while vision was impaired in only eight percent. Segmental vitiligo was represented in 13 percent of the patients. Leukotrichia was observed in 37 (37%) cases. The mean VASI score was 13.16±24.16.

Among the studied criteria, the SNPs genotypes and alleles distribution did not show any significant difference, except for the predominance of A allele of rs2071543 in female patients and in patients with ear affection (Figures 1 and 2). 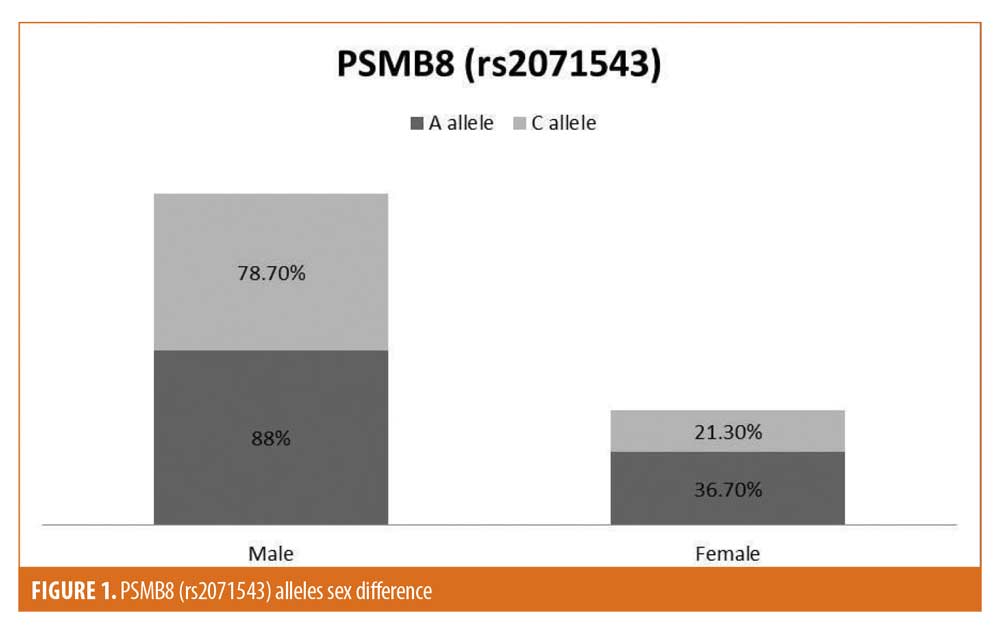 In the present study, the association of these SNPs with vitiligo in an Egyptian sample of patients with vitiligo was studied. Our findings revealed that AA and CA genotypes and A allele of PSMB8 gene (rs2071543), as well as  TT and GT genotypes and T allele of PSMB8 gene (intron6snp), increase the risk of vitiligo significantly. The same result was found by  Dani et al10 in an Indian sample of patients with vitiligo. However, they did not report a significant difference between patients and controls regarding GT genotype.

Casp et al13 found that the T allele of PSMB8 (intron6snp) had a protective role against vitiligo development, while the present study found that T allele of the same SNP was a risk factor for vitiligo development. This difference is not completely understood, as the effect of the T allele in this position on the PSMB8 activity or serum levels is not clear yet. However, this difference could be attributed to the different ethnicities of the patients in both studies.

The A allele of rs2071543 was predominant in female patients in this study, while there was an insignificant difference between male and female patients regarding genotype distribution. However, Dani et al10 found that the A allele and genotype CA were significantly increased in male patients. In fact, proteasome activity may be affected by sex,14 and many gene polymorphisms and genetic susceptibility might differ from men to women,15 so further studies regarding the sex differences in the studied gene polymorphisms are of importance.

There is convincing evidence that vitiligo is a systemic disorder influencing the whole pigmentary system, including melanocytes in the inner ear. Cochlear melanocytes and melanin-containing cellular elements of the auditory system may be affected in vitiligo, with subsequent interference with the conduction of action potentials.16 There are discrepancies in the literature about the specific influence of vitiligo on auditory threshold. Some authors17,18 reported vitiligo-associated hearing affection, while others19 reported no hearing affection in patients with vitiligo.

Many theories were advocated to explain the role of cochlear melanocytes in normal hearing. None are well established, but they all share the final step; the disappearance of cochlear functioning melanocytes leads to the loss of the supporting and protective effects of melanin. This may contribute to the impaired hearing acuity.20

In the present study, 10 percent of patients with vitiligo had impaired hearing acuity. In those patients, the A allele of rs2071543 was significantly more predominant. Thus, the current workers propose that patients with vitiligo carrying the A allele at rs2071543 should receive routine monitoring for auditory and vestibular functions for early identification and management of auditory changes as the disease progresses.

In the current study, patients with hearing abnormality were significantly older and reported longer disease duration when compared to those without hearing deficits. This comes in agreement with Ardie et al21 and Aslan et al,22 who reported  a significant relation  between the duration of vitiligo and hearing loss. In fact, the progressive loss of cutaneous melanocytes might be associated with a progressive loss of cochlear melanocytes, leading to a continuous deterioration of hearing acuity over time. However, the possibility of deterioration of hearing acuity as a manifestation of normal aging cannot be excluded. More studies could be helpful to clarify this association.

On the other hand, Sharma et al,23 Elsaied et al,19 and Mahdi et al24 did not report an association between the hearing abnormalities in patients with vitiligo and their age or disease duration. They proposed a theory that the pigment cells in the ear are affected at the disease onset, then they stabilize. This discrepancy in the results may be explained by the significantly older age and longer disease duration in our patients when compared to the aforementioned studies.

The mean age of onset in our patients with auditory problems was significantly higher when compared to those who did not show auditory defects (28.2±18 vs. 13.29±12.12 years old). Al-Mutairi and Al-Sebeih25 concluded that no significant association was detected between late onset vitiligo and auditory disorders; however, they did not compare the incidence of hearing impairment between early- and late-onset vitiligo cases.

The mean BMI of our patients with hearing affects was significantly higher than that in the other group. To the best of our knowledge, this association was not highlighted before. However, Hu et al26 concluded that increased BMI may carry an increased risk of hearing impairment, especially in cases of morbid obesity.

All our patients with hearing loss suffered from extensive forms of vitiligo (generalized or universal). We think that extensive cutaneous involvement suggests an aggressive pathogenic process, which may destroy ear pigment cells. However, Moghaddam et al27 concluded that there was no significant association between vitiligo severity and the auditory defects. Moreover, hypoacusis patients in Al-Mutairi and Al-Sebeih’s25 study were distributed on different vitiligo forms. This discrepancy of findings may be a nucleus for more research.

PSMB8 (rs2071543 and intron6snp) gene polymorphisms are associated with vitiligo susceptibility, and they can alter the clinical aspects of the disease. Older patients with vitiligo, and those with later age of disease onset, longer disease duration, higher BMI, and higher VASI scores are at higher risk of developing auditory impairment. Factors predicting auditory abnormalities should be studied carefully to allow early detection and management of this problem.