The Michael Jackson and Winnie Harlow Effect: Impact on Vitiligo Awareness on the Internet

Public awareness of diseases has been shown to increased when celebrities publicly disclose their own.1–3 Hugh Jackman’s public disclosure of his basal cell carcinoma diagnoses via social media is an example in dermatology.4 Here, we evaluated current trends on vitiligo, with emphasis on two celebrities with the condition: the late “King of Pop,” Michael Jackson (MJ), and Canadian model Winnie Harlow (WH).

We analyzed data generated through Google Trends (GT), for the relative search volumes using keywords vitiligo, Michael Jackson, and Winnie Harlow worldwide from January 1, 2004, to December 31, 2018. GT (https://trends.google.com/trends/) provides data on the relative search volume of queries and topics over time and across geographical areas. It allows seasonal and long-term assessment of trends in public interest. It has been previously used in dermatology to compare the burden of various dermatological skin diseases by way of most frequently searched conditions.5 Our study did not require ethical approval by an institutional review board.

Search levels for vitiligo reached their peak between June 28, 2009, and July 4, 2009—after MJ passed away on June 25, 2009 (Figure 1). This peak is the highest for vitiligo in the past 14 years. MJ’s autopsy confirmed that he had vitiligo.6 When comparing relative search volumes for vitiligo and Michael Jackson worldwide between 2004 and 2018, it was difficult to assess a notable link between MJ  and vitiligo, before or after his death (data not shown). At the time of his death, the relative volume searches were 100 and 1 for the singer and vitiligo, respectively. However, the impact of MJ’s death remains notable for vitiligo, alone or compared to other skin conditions during that period (data not shown). 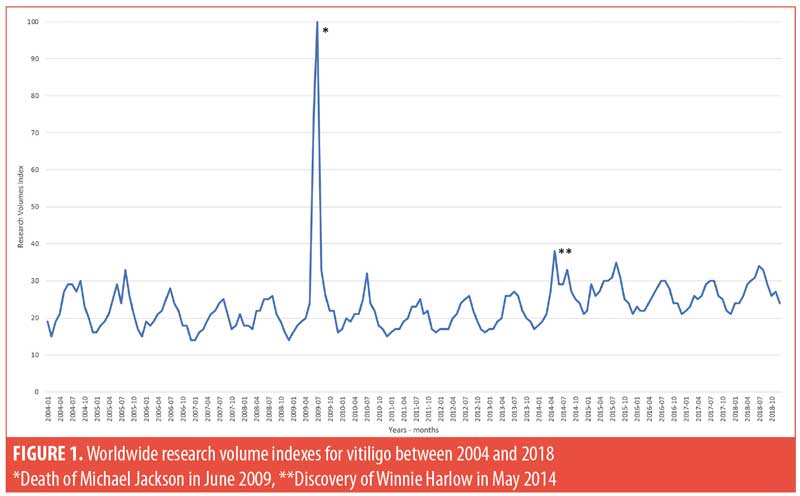 WH is a young fashion model with dark skin and vitiligo. She was discovered after being cast on a reality television program in 2014. Her emergence in the public eye is associated with the second highest number of internet searches for vitiligo, after MJ’s death (Figure 1).  Analysis since 2014 shows an association between public appearances of the model and vitiligo searches (Figures 1 and 2). 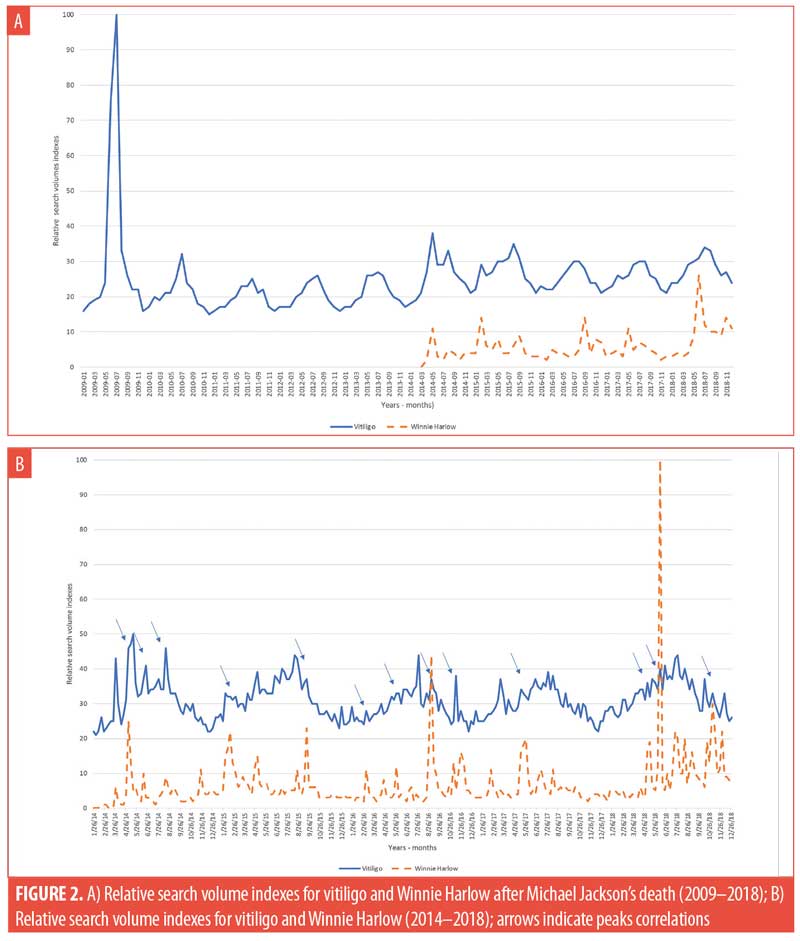 The search activity over the last 14 years for vitiligo has remained fairly stable, with increases in interest during the summer. Vitiligo tends to occur or recur in spring or summer and sun exposure and lighter clothing increase vitiligo visibility. Patients with vitiligo might have increased interest in sun exposure and sun protection before vacations.

MJ and WH are two of the most prominent public figures with vitiligo. However, MJ influenced vitiligo searches mainly after his death. After this peak, search volumes returned to baseline level. His skin condition was always hidden by various methods (e.g. make-up tattoos), as a result, the public never saw MJ’s vitiligo patches, making his case a less educational one for the public, despite his celebrity.6 However, World Vitiligo Day occurs on June 25, in remembrance of MJ’s death.7 Contrarily, WH is famous as a result of her vitiligo and acts as an advocate for empowering and uplifting others with the condition through public appearances, exposure of her vitiligo patches on the catwalk, and her presence on social media. Peak searches for vitiligo occur whenever she is mentioned (Figure 1B). However, according to the GT search volumes we observed, her influence remains less palpable than the period following MJ’s death.

The increased public interest in vitiligo as a result MJ and WH’s presence in the public eye supports the idea that awareness of celebrities’ diagnoses, through social media or otherwise, can increase general awareness of little-known conditions among the public while empowering and educating people who deal with these conditions themselves.

Dr. Kluger is with the Departments of Dermatology, Allergology, and Venereology at Helsinki University Central Hospital in Helsinki, Finland.

Acknowledgments. The author acknowledges Pr. Mahtab Samimi for her comments regarding the manuscript.

Disclosures. The author has no conflicts of interest relevant to the content of this article.