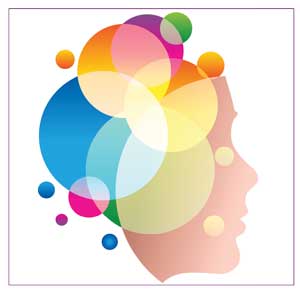 Both authors are with the Psoriasis Treatment Center of Central New Jersey in East Windsor, New Jersey.

Funding: This study was sponsored by Taro Pharmaceuticals U.S.A., Inc.

Abstract: Objective. The goal of this study was to evaluate efficacy and safety of desoximetasone spray 0.25%, a topical corticosteroid, in the management of scalp and body psoriasis.

Design. This was an open-label, observational study.

Participants. Twenty adults aged 18 years or older with chronic scalp psoriasis present on at least 30 percent of the scalp surface area and an Investigator Global Assessment (IGA) scale score of scalp disease of at least 2 on a scale of 0 to 4 were included in the study.

Psoriasis is a chronic immunological disease characterized by infiltration of the skin with activated T-cells and by abnormal keratinocyte proliferation and differentiation, resulting in marked inflammation and thickening of the epidermis. Psoriasis affects 1 to 3 percent of the world’s population, making it one of the most prevalent inflammatory immunological diseases. It is a disabling disease, and the impact it can have on quality of life is often underestimated by healthcare providers.1 There are several clinical subtypes of psoriasis, with the most common being plaque psoriasis, affecting 75 to 80 percent of patients with psoriasis.2 Plaque psoriasis is characterized by epidermal hyperproliferation and inflammation of the epidermis and dermis. Clinically, it presents as raised silvery scales with underlying erythema, itching, and discomfort. Plaques might affect large areas of the skin and have a significant psychosocial impact on the lives of patients.

The scalp is one of the most common sites of psoriasis, often presenting at disease onset and continuing throughout the course of the disease.3 An estimated 50 to 80 percent of patients with psoriasis have scalp involvement.4 Psoriasis of the scalp is highly visible and has been found to have an outsized impact on the quality of life (QOL) of patients, even when only a small amount of body surface area (BSA) is affected. Visible plaques can affect self-esteem and negatively impact the ability of patients to socialize normally.3 The condition can appear as only localized scales or can manifest as widespread, hyperkeratotic plaques. Scales can extend visibly beyond the hair margins and involve the face, neck, and ears. Patients with scalp involvement might experience intense itching.5 Furthermore, topical therapies used to treat psoriasis can affect the cosmetic appearance of the hair. Application of topical therapy, along with the patient itch-and-scratch cycle, can produce a perpetual koebnerization that could perpetuate disease activity.3 Another issue for patients is being able to correctly apply topical therapies so as to bypass the hair. Taken together, these factors might affect adherence and efficacy of treatment.

Topical therapy of scalp psoriasis has been shown to improve QOL outcomes.6 It has been suggested that newer vehicles, including sprays and foams, are the most appropriate methods for scalp medication application because they are less messy and are better able to penetrate to the scalp through the hair.5 It has recently been shown that patients with plaque psoriasis prefer sprays more than 2 to 1 over creams, ointments, lotions, gels, and foams.7

In this report, we present the findings of an open-label, observational study evaluating the efficacy, tolerability, and patient satisfaction of desoximetasone 0.25% spray (Topicort® Spray 0.25%; Taro Pharmaceuticals, Inc., Hawthorne, New York) in the treatment of psoriasis of the scalp. Desoximetasone spray 0.25% is a Class I, super-potent corticosteroid that has been shown to provide rapid and effective relief of scaling in plaque psoriasis.7 It is the first super-potent formulation of desoximetasone.8 The use of a spray might improve patient adherence. The Psoriasis Process of Care Consensus Panel noted that spray is the preferred vehicle for the scalp, male chest, and other hair-bearing locations, as well as when there is extensive skin involvement.5

Study design. Twenty patients with plaque psoriasis of the scalp were enrolled in this 16-week study. They used desoximetasone spray 0.25% twice daily for four weeks, followed by twice-daily application on two consecutive days per week for an additional 12 weeks. Subjects also applied the study material to other areas affected by plaque psoriasis, excluding the face, groin, and axillae.

Inclusion/exclusion criteria. The main inclusion criteria were men and women aged 18 years or older with a diagnosis of chronic plaque psoriasis of the scalp, with a scalp surface involvement of at least 30 percent and an Investigator Global Assessment (IGA) scale score of at least 2 on a 0- to 4-point scale. Main exclusion criteria were subjects with non-plaque psoriasis (e.g., guttate or pustular); those with less than 30-percent scalp involvement; and those using study-prohibited medications and therapies within 2 to 4 weeks (depending on medication/therapy being used) of baseline. Subjects were permitted to use non-steroidal topical medications on the face, groin, and axillae during the study period.

Psoriasis Scalp Severity Index (PSSI) and scalp surface area (SSA) were also calculated. The average degree of scalp erythema, induration, and desquamation severity were assessed and assigned a score of 0 to 4 (0=mild, 4=severe). The SSA was estimated as a percentage. The PSSI score is the sum of the erythema, induration, and desquamation scores multiplied by the SSA.

Another efficacy endpoint was Physician Global Assessment (PGA) Scale score, a 5-point scale that records the overall disease severity at each clinical evaluation based on the average degree of erythema, induration, and scaling of all areas affected by psoriasis. The PGA scale used was 0=clear, 1=almost clear, 2=mild, 3=moderate, and 4=severe.

BSA was determined for all subjects throughout the study. BSA was calculated by using the palm sizes of subjects to represent one percent of BSA.5

Patient-reported outcomes included subject self-assessments of pain, itching, and scaling of the scalp in the prior 24 hours on a Likert scale of 1 to 10 (1=minimal, 10=severe) at Weeks 0, 4, and 16. In addition, Scalpdex, a self-administered QOL instrument developed for scalp dermatitis, was used.9 This 23-item survey evaluates patients with cutaneous scalp involvement across the domains of pain, function, and emotion over the preceding three weeks. It was also administered at Weeks 0, 4, and 16. 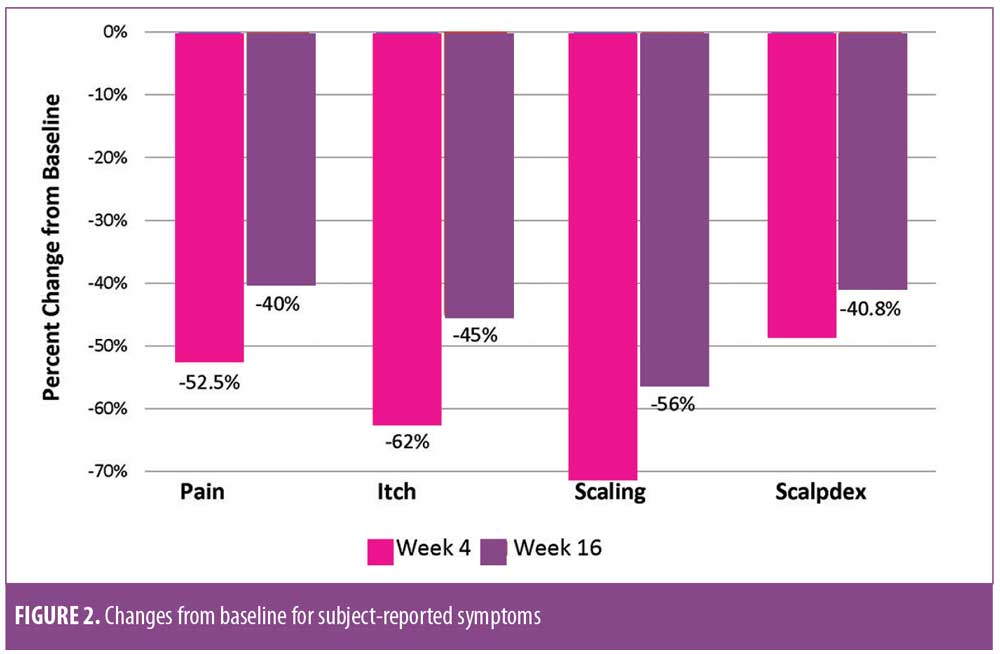 Safety results. There were a total of 19 adverse events (AEs) that occurred in nine subjects. The most common AEs overall were burning sensation in five subjects and itching in three subjects. Nine of the 19 AEs were considered treatment-related and occurred in seven subjects, or 35 percent of the study population. Additional AEs that were considered treatment-related were folliculitis in one subject and acne in two subjects.

This open-label, observational study of desoximetasone 0.25% topical spray to treat scalp psoriasis indicates that this treatment is safe and effective. Onset of action was rapid across all efficacy parameters, with significant improvements seen as early as Week 4 after initiation of treatment, thus optimizing initial control. PGA, BSA, BSA×PGA, scalp IGA, and PSSI were reduced from baseline by 55, 51, 63, 65, and 82.4 percent, respectively. After four weeks, desoximetasone 0.25% spray was decreased from twice-daily application to twice-daily application on two consecutive days per week from Week 4 through Week 16. Improvements from baseline were maintained at Week 16. At Week 16, PGA and scalp IGA were reduced from baseline by approximately 50 percent. Additionally, PSSI was reduced by 63.4 percent at Week 16.

Taken together, our findings demonstrate that desoximetasone 0.25% topical spray prompts rapid and significant improvement in scalp psoriasis. This level of efficacy combined with the convenience and the use of a patient-preferred spray vehicle suggest that this is an effective therapy for scalp psoriasis. A larger, randomized, controlled trial should be initiated in order to corroborate and extend these results.