ABSTRACT: Introduction. Cryolipolysis is a noninvasive technique that involves the application of cooling for localized fat reduction. In recent years, cryolipolysis has been increasingly favored for its limited side effects compared to more invasive methods.

Methods.Records from a public United States Food and Drug Administration (FDA) database for premarket approval of cryolipolysis devices approved between January 1, 2000 and July 15, 2018 were reviewed.

Results. Eleven devices received 510(k) premarket approval, with an increasing number of devices available since 2012. In addition, product indications have recently been expanded for use in patients with body mass index (BMI) values of up to 43kg/m2.

Conclusion. The number of approved cryolipolysis devices has increased, with more companies exploring the technology’s growth potential in the market. Furthermore, use in patients with higher body mass index values is now permitted and expanding; however, indications are not well studied, and these marketed devices might misinform consumers and distort clinical expectations. Additional research to delineate specific practice guidelines for cryolipolysis is necessary.

Cryolipolysis is a noninvasive technique that involves the application of cooling for localized fat reduction. As adipocytes are particularly susceptible to the effects of cold, cryolipolysis induces the apoptosis of fat cells while sparing other structures in the skin from injury.1 In clinical studies exploring the efficacy of cryolipolysis, mean caliper fat layer reduction ranged from 14.7 to 28.5 percent, with effects lasting up to nine years posttreatment.2,3 Due to the increasing risk of complications associated with invasive methods of fat reduction, including liposuction, cryolipolysis has been increasingly favored for its limited side effect profile.

The United States Food and Drug Association (FDA) must approve a 510(k) premarket submission for manufacturers to retail a device in the country. Approvals are granted once manufacturers demonstrate that the device is at least as safe and effective, that is, “substantially equivalent,” to a device already being legally marketed.4 The objective of this study is to characterize how the marketing of cryolipolysis devices has changed since they first appeared on the market.

In the present study, we reviewed records from a public FDA database for premarket approval of cryolipolysis devices occurring between January 1, 2000, and July 15, 2018. Institutional review board exemption was granted for this cross-sectional retrospective analysis. Descriptive analyses were performed on the following: number of devices marketed, manufacturing corporations, and target population characteristics, such as body mass index (BMI).

Eleven relevant devices received 510(k) premarket approval during the years 2000 to 2018, with the first approval in 2012. Since then, greater attention to the role of cryolipolysis devices in localized fat reduction has led to an increase in available devices (R2 =0.8410)(Figure 1). While production of these devices was initially dominated by a single company (Zeltiq Aesthetics Inc., Pleasanton, California), a second corporation (Cynosure Inc., Westford, Massachusetts) has since begun developing these devices as well (Figure 2). 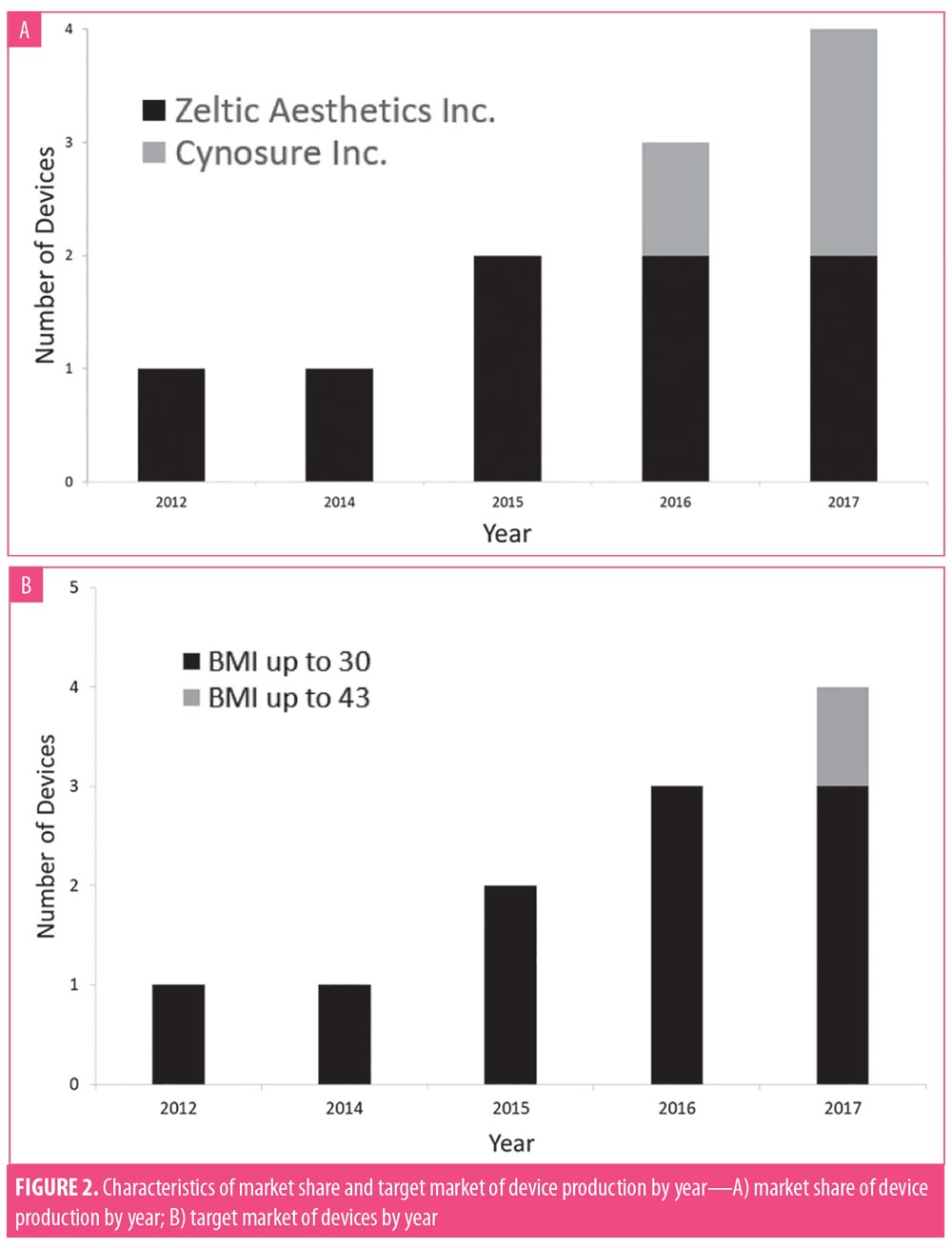 Recently, cryolipolysis has gained recognition among both the public and medical community as a safe and effective option for localized fat reduction. While similar devices were available prior to 2012, the FDA reports that the devices were originally intended to provide localized thermal therapy, both hot and cold, to minimize postprocedural pain and provide temporary relief of minor aches, pains, and muscle spasms. Years later, these devices are now marketed for routine use in cryolipolysis. Approved cryolipolysis devices have increased in number, with more companies exploring their growth potential in the market. Furthermore, use in patients with higher BMI values is now permitted and expanding. Although these devices are relatively safe, marketed indications are not well-studied or regulated, and optimal protocols and candidates for cryolipolysis have yet to be determined. As such, these marketed devices might misinform consumers and distort clinical expectations, especially since formal data are not required for 510(k) premarket approvals. Thus, additional research to delineate specific practice guidelines for cryolipolysis is necessary.