The Association of Various Metabolic Parameters with Multiple Skin Tags

FUNDING: No funding was received for this study.

Results. The univariate analysis showed that patients who were overweight with Fitzpatrick Skin Type III, acanthosis nigricans, and hypothyroidism were more likely to present with multiple skin tags as compared with patients at a normal weight with Skin Type I. Statistically significant associations were also found with the presence of cholesterol and triglycerides. In the multivariate analysis, a significant association between hypercholesterolemia and STs was demonstrated. Those with skin tags were more likely to have hypothyroidism.

Conclusion. STs are often associated with obesity. An association between lipid profile and STs has been reported. Multiple STs have been independently associated with acanthosis nigricans. Although a possible relationship between STs and thyroid disease has not yet been proved, our review reveals a possible trend. Future investigations with larger sample sizes might clarify the association between skin tags and hypothyroidism.

Skin tags (STs), also known as acrochordons or fibroepithelial polyps, are benign skin lesions composed of loose fibrous tissue that usually occur on the eyelids, neck, axillae, or groin. They are skin-colored and typically vary in diameter from 2 to 6mm, although larger and hyperpigmented lesions have been observed.1 STs can present singly or as multiple lesions. They tend to grow progressively in size and do not disappear on their own. STs are extremely common in adults older than 40 years of age and increase in incidence in the elderly.2 They often develop in areas of skin friction, but their definite etiology is still unknown.

The present study aims to examine the association of obesity, DM, hyperlipidemia, thyroid abnormalities, acanthosis nigricans, and multiple STs in a Greek population.

We recruited 88 patients who attended our dermatology outpatient clinic over a six-month period. Patient selection was based on the presence of STs. A multiple-ST patient was defined as having 10 or more STs. Patients met inclusion criteria if they were 20 years of age or older, possessed an understanding of Greek language, and were able to provide informed consent. The study protocol was approved by the ethics committee of the hospital.

All patients were interviewed and examined by the same investigator. Overweightness was defined as a body mass index (BMI) of 25 to 30kg/m2 and obesity was defined as a BMI over 30kg/m2. Phototype was recorded using the Fitzpatrick scale. Fasting serum blood samples were analyzed for cholesterol, low-density lipoprotein, high-density lipoprotein, triglycerides, glucose, and thyroid-stimulating hormone.

Statistical methods. Data were statistically described in terms of range, mean±standard deviation, frequencies (i.e., number of cases), and percentages where appropriate. Univariate ordinal logistic regression analysis was performed to identify factors associated with the number of STs. Variables with a statistical significance lower than 10 percent were chosen for multivariate analysis in order to find a statistical model that best describes these patients. When deciding which variables we would choose to include, we considered not only the statistical significance (P= 0.10), but the previously published evidence. For variables with more than two levels, we used a likelihood ratio test to assess significance. Associations are presented in the format of odds ratio (OR) with 95% confidence interval (CI). All statistical calculations were done using using the Stata version 11.1 software package (StataCorp, College Station, Texas).

Out of the 88 patients with STs, 58 were women and 30 were men. The mean age was 49.89±12.73 years. Thirty-four patients (38.64%) had between 10 and 30 STs. Continuous variables are presented as means and standard deviations and categorical values are presented as absolute and relative frequencies (Table 1).

Patients with acanthosis nigricans have almost a 20-fold (19.1-fold) higher possibility of appearing with multiple STs.

The relationship between STs and lipid levels (normal vs. abnormal) was statistically significant for cholesterol and triglycerides, with an odds ratio of close to 1 (Table 2). Other variables recorded from our patients (age, gender, DM, smoking, commorbitities) were not found to be statistically significant and were not considered in further analysis. The statistical model that best described patients with STs included BMI categorical variables, at least two areas of location of STs, the patient’s skin phototype, and the patient’s blood cholesterol levels, with a statistical significance of lower than 10 percent (Table 3). 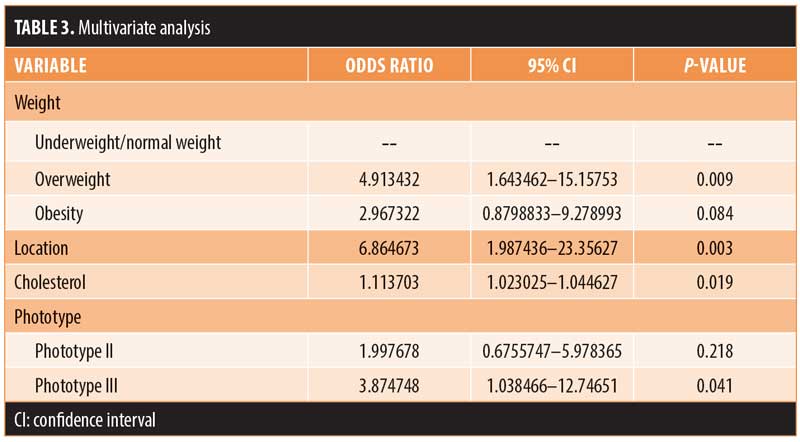 The odds ratios for most of the variables in the multivariate analysis had more or less the same values as those in the univariate analysis. The likelihood of a patient having STs in more than two locations is 6.9 more likely than the possibility of having them in one area. A significant association between hypercholesterolemia and STs was demonstrated (1.11). Although hypothyroidism was not found to be statistically significant enough to be included in the final model describing patients with STs, a trend considered important was found during the univariate statistical analysis (Table 4). Specifically, as the number of STs increased, so too did the number of hypothyroid patients; one patient had 5 to 10 STs, two patients had 10 to 30 STs, and seven patients had more than 30 STs, respectively.

STs are common fibrous lesions of the skin. Most patients with STs consult a doctor for cosmetic reasons. They are frequently associated with systemic diseases. Our study showed a significant association between body weight, hypercholesterolemia, hyperthyroidism, acanthosis nigricans, and STs. Agarwal and Nigam9 reported that 21.2 percent of 118 patients with STs were obese. Other research has demonstrated similar findings.6,10 We also found body weight to be statistically significantly related. Overweight people were more likely to present with multiple STs than obese individuals. Demir et al11 observed that the neck was the most common location of STs, and our results concurred with this observation.

Crook12 reported an atherogenic lipid profile in a small study group including four patients with STs. Sari et al13 evaluated 113 patients with STs and recorded dyslipidemia in 59.3 percent of these patients. Shah et al1 found higher total cholesterol, triglyceride, low-density lipoprotein cholesterol, and lower high-density lipoprotein cholesterol levels in patients with STs. In another study by Erdogan et al,5 total cholesterol levels were again significantly higher. Vinod et al14 recently showed that the lipid profile was altered in patients with STs, but was statistically significant only in the cases of triglyceride and low-density lipoprotein levels. Similarly, our results demonstrated a significant association between multiple STs and high cholesterol levels. The independent association between elevated triglycerides and STs became nonsignificant after multivariate adjustment. Several studies have reported a significant association between leptin levels and STs, although others studies have not.8,10,13,15,16 A possible explanation for how leptin plays a role in the development of STs is the proliferative effects of leptin cutaneous keratinocytes. Leptin levels were not assessed in our study.

A relationship between DM and STs has also been reported in various studies. Hui et al17 found that multiple STs were independently associated with DM. Rasi et al18 studied 104 patients and 94 controls and found that patients with more than 30 STs were at a higher risk of having DM. Sudy et al4 found that multiple STs were related with laboratory glucose and/or insulin abnormalities (e.g., basal hyperinsulinemia, postprandial hyperinsulinemia, and postprandial hyperglycemia). Norris et al19 demonstrated that STs were more closely associated with fasting insulin than with fasting glucose levels.Shah et al1 detected overt DM in 58 (52%) of 110 patients and 12 (10%) of 110 controls; this difference was considered to be statistically significant. Kahara et al16 found no correlation between the localization, size, color, and number of the lesions with the presence of glucose intolerance. However, our study did not show an association between STs and DM.

Insulin levels in patients with STs are far greater than in control individuals.20 The fibroblast proliferation that occurs in STs appears to be due to hyperinsulinemia through the activation of insulin-like growth factor receptors.21 Hyperinsulinemia interacts with epidermal keratinocytes, resulting in acanthosis nigricans. In accordance, we found that patients with multiple STs had a higher prevalence of acanthosis nigricans.

To our knowledge, a possible relationship between STs and thyroid disease has not yet been proven. Rezzonico et al concluded that patients with STs have a high prevalence of thyroid nodules and thyroids with increased volume.22 In our study, the presence of hypothyroidism in patients with multiple STs was considered statistically significant in the univariate analysis. This could be possibly explained by the fact that STs and thyroid changes might be associated with high levels of circulating insulin.18

Limitations. The present study was performed in a single center and the subject sample size was small.

The statistical model that best described our patients with multiple STs included the presence of STs at more than two anatomical areas, darker skin types (Fitzpatrick III–IV), obesity, and hypercholesterolemia. Our results suggest the need for screening of patients with multiple STs for increased cholesterol, triglycerides, and impaired thyroid function. Future research should explore the findings of this study using a larger sample size.