All authors are with the Department of Dermatology at Wake Forest School of Medicine in Winston-Salem, North Carolina.


FUNDING: No funding was provided for this study.

DISCLOSURES: Dr. McMichael is a consultant for Allergan, eResearch Technology, Inc., Galderma, Guthey Renker, Johnson & Johnson, Keranetics, Merck & Co., Inc., Merz Pharmaceuticals, Proctor & Gamble, Samumed, and Incyte. Dr. McMichael also receives grants from Allergan and Proctor & Gamble, as well as royalties from UpToDate and Informa Inc. and has conducted research for Samumed. The other authors have no conflicts of interest relevant to the content of this article.


ABSTRACT: Background. Dermatosis papulosa nigra (DPN) is a skin condition characterized by pigmented sessile and pedunculated papules on the body, particularly on the face and other sun-exposed areas, that can cause cosmetic disfigurement and varying degrees of distress and psychosocial concern among patients.

Objective. We sought to evaluate the effect of DPN on quality of life (QoL).

Methods. A 39-item questionnaire was administered to 50 African-American (AA) adults, 48 women and two men, with an average age of 51.7 years and visible DPN lesions at a dermatology clinic. We collected demographic information, family history, prior treatment, as well as type(s), frequency, duration of lesions, and attitudes about lesions. Dermatologic QoL (DLQI) survey scores were used to quantify the effect that DPN had on QoL.

Results. Most subjects reported lesions on the face (86%); 49 percent reported between 10 to 30 lesions on the body. The average age of diagnosis was 44.7 years (±15.51 years). Further, 84 percent of subjects reported having a first-degree relative with DPN. Most patients reported little to no symptoms from their DPN (82%), while 36 percent had previously visited a physician due to their DPN. Electrocautery and cryosurgery were the most common methods of DPN removal. All subjects who had their DPN lesions removed reported improvement in the appearance of their skin. The average (standard deviation) DLQI score was six points (±5.42 points), which indicates that DPN has a moderate effect on QoL.

Conclusion. Our study results reveal the high likelihood of a family history of DPN in subjects with the condition. Overall, most subjects reported few symptoms of DPN and their QoL was only moderately affected by DPN. Still, patients might benefit from the removal of DPN lesions.

Dermatosis papulosa nigra (DPN) is a skin condition characterized by pigmented sessile and pedunculated papules on the body, particularly on the face and other sun-exposed areas, which vary from 1mm to 5mm in size.1 People of African descent show the highest prevalence of DPN, with a reported range of 10 percent to 30 percent.2 Along these lines, incidence rates of DPN are approximately 70 percent in African-American (AA) individuals and 40 percent in African individuals.3,4 Meanwhile, DPN has also been found to affect women almost twice as frequently as men.3 The diagnosis is typically made clinically, though histology does elucidate unique features that can aid in equivocal cases; histologically, DPN is characterized by moderate papillomatosis, acanthosis, and hyperkeratosis. DPN is largely regarded as a variant of seborrheic keratosis, given its similar appearance on histology. Furthermore, fibroblast growth factor receptor 3 mutations have recently been identified in DPN similar to those previously identified in seborrheic keratosis.5 DPN lesions are generally benign, with no malignant potential. However, DPN can cause cosmetic disfigurement and varying degrees of distress and psychosocial concern among affected patients. There is no standardized treatment modality for DPN removal; cryotherapy, curettage, electrocautery, dermabrasion, and various laser treatments have all been used.6–8 In this study, we evaluated the demographic, clinical, and quality of life (QoL) data of individuals with DPN.

A 39-item questionnaire was administered to 50 African American (AA) adults with visible DPN lesions at a dermatology clinic. The diagnosis of DPN was made clinically in all included study patients. DPN denotes findings of pedunculated and sessile pigmented lesions throughout the body. We gathered information about each subject’s race, income level, lesion characteristics, including type(s), frequency, and duration of lesions, attitudes about the lesions, family history, and prior treatment. The disseminated study questionnaire included the validated Brief Fear of Negative Evaluation (FNEB) survey; FNEB scores were used to assess anxiety levels in normal social situations.9 The study questionnaire also included the Dermatologic Quality of Life (DLQI) survey, a validated instrument that was used to quantify the effect that DPN had on QoL.10 The study was approved by the Wake Forest Baptist Health institutional review board. Written informed consent was obtained from all participants, and they were not compensated for participating.

Forty-eight women and two men completed the survey. The mean (standard deviation [SD]) age of participants was 51.7 years (±10.01 years) (Table 1). Sixty percent were diagnosed with DPN at the time of the survey, with the remainder having been diagnosed previously. The average (SD) reported age at diagnosis was 44.7 years (±15.51 years). Meanwhile, 84 percent of subjects reported having a first-degree relative with DPN, where 30 percent (32/108) of these relatives were first-degree male relatives, 66 percent (71/108) were first-degree female relatives, and 4.6 percent of the relatives were reported as “other” (Figure 1).

DPN lesions were distributed over an average of four body surfaces and the number of involved body surfaces was similar across all age groups. Most subjects showed lesions throughout the face and neck (86% and 58%, respectively) (Figure 2). The average number of DPN lesions reported by subjects was 23 lesions, although this varied greatly, ranging from four to 72 lesions. The total number of lesions correlated positively with the age of the subjects. The average number of lesions was greatest on the face (8.25 lesions), followed by on the neck (6.25 lesions) and chest (5.86 lesions). 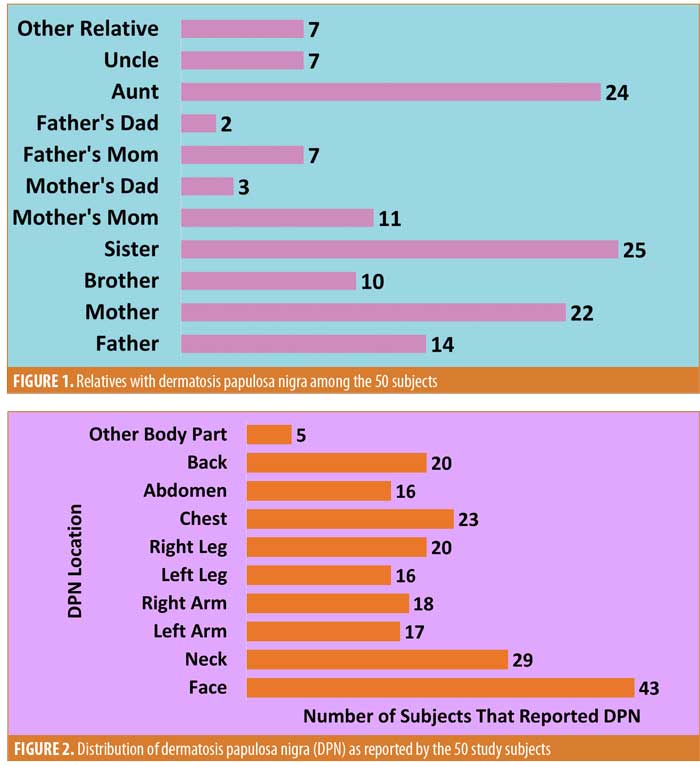 Specific symptomatology data were not collected; however, when asked, “over the last week, how itchy, sore, painful, or stinging has your skin been?,” 82 percent of subjects responded with “very little” or “not at all.” Thirty-four percent of study participants reported seeking out a physician due to their DPN lesions, while 64 percent of subjects were concerned about potential adverse effects of DPN removal. Specifically, patients were concerned with the following side effects: pain (66%), hyperpigmentation (75%), and fear of regrowth (75%). Meanwhile, 36 percent of subjects had previously undergone DPN removal using methods, such as electrocautery (47%), cryosurgery (21%), laser removal (11%), and an unspecified prescription (5%). All (100%) subjects who had undergone DPN removal reported seeing improvements in the appearance of their skin after treatment.

The average (SD) FNEB score was 21.48 points (6.45 points), which correlates with being relaxed in social situations. The average (SD) DLQI score was six points (5.42 points), which indicates that, on average, DPN has a moderate effect on QoL (Table 2). The question that inquired about “feeling embarrassed or self-conscious” contributed most to the overall DLQI average score.

To our knowledge, only one DPN QoL study, performed in Senegal by Niang et al,11 is reported in the literature. To date, no study on the QoL effects of DPN has been performed on AA subjects. Our results strongly support a familial history of DPN in those who are affected. Our study sample was predominantly women and most of the reported first-degree relatives with DPN were women, findings which suggest that DPN might have a higher predilection among women. This familial predisposition and female predominance is consistent with findings of previous studies.3,11 However, an oversampling of women is likely present in our study cohort, since women are more likely than men to frequent dermatology clinics. The larger percentage of reported first-degree male relatives with DPN relative to the percentage of men in our study cohort is suggestive of selection bias. A limitation to this study is that, given the significant selection bias for women that may have skewed some of the results, men might not have been as impacted by the appearance of DPN as the women in our study.

The average FNEB score in our cohort was low, indicating that our subjects are generally relaxed in social situations. Yet, on average, DPN was found to have a moderate effect on the QoL of our study subjects (Table 2). Further, 36 percent of subjects have previously sought to remove their lesions, despite 67 percent (12/18) of the treated subjects reporting experiencing little to no symptoms from the lesions. This suggests that DPN might pose a cosmetic and psychosocial concern for many patients.

Our study also revealed that many patients might have concerns about the potential adverse effects of DPN removal. Currently, there are several surgical methods available to remove DPN, all of which can be performed in an office-based setting. These include electrocautery, scissor or shave excision, cryotherapy, and laser application.6–8 No study has yet revealed any one of these methods to be superior over the others in the removal of DPN or seborrheic keratoses.1,14 The side effect profiles of these procedures are minimal, though any surgical intervention can potentially result in dyspigmentation or scar formation at the site of removal, and there is a risk of mild discomfort associated with the procedures noted above.

As DPN is very common among individuals of African descent, it is important for dermatologists to be prepared to discuss the benign nature of these lesions while understanding that a proportion of patients with DPN will have some concerns regarding the impact on their QoL. For patients who express cosmetic or psychosocial concerns regarding DPN, dermatologists should offer low-risk options for removal and emphasize the favorable side-effect profile of these procedures. As more options for pain-free removal of benign lesions become FDA-approved and available, it will be imperative to study these treatments in the context of DPN removal.